Dr Haldane also taught on Islamic Arts as part of the Graduate Programme in Islamic Studies and Humanities and was a mentor and advisor to many students at the IIS. During the Institute’s Worlds of Learning Campaign (2000-2001), he accompanied an extensive exhibition and delivered talks on The Institute of Ismaili Studies’ collection in Los Angeles, San Jose, Chicago, Miami, Paris, Nottingham and London.

In 2003, as part of the Institute’s 25th Anniversary colloquium “Word of God; Art of Man” at the Ismaili Centre, London, Dr Haldane presented a paper entitled “Arts of the Celestial Pen: Qur’ans from the Library of The Institute of Ismaili Studies”. Proceedings of this conference are to be published and will include this paper. Dr Haldane participated in several international conferences, published articles in various art journals, and lectured in Islamic art in several institutions. 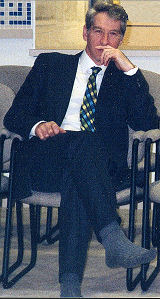 Dr Haldane graduated from the University of Edinburgh where he studied Arabic and was awarded his doctorate in 1973. His doctoral thesis was subsequently published as a monograph entitled “Mamluk Painting”.

Dr Haldane also worked at the University of Surrey, Roehampton for three years and was the Conference Organiser for “Art and the Visually Impaired” in 1995. He was a visiting Senior Research Fellow at the University of Exeter’s Department of Islamic studies from 1995 to 1998. He was a member of the Middle East Libraries Committee (MELCOM, UK) and of the South Asia Archive and Library Group. In 2005, Dr Haldane joined the Altajir Trust.