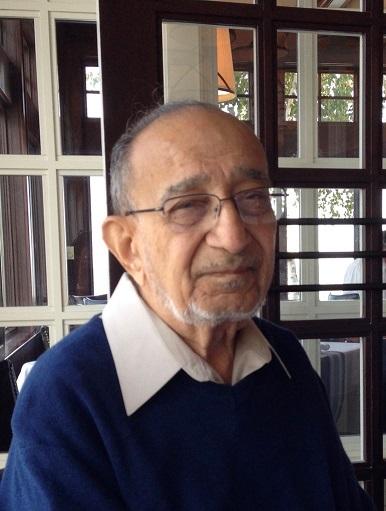 Abbas Hamdani will be remembered by IIS staff and colleagues for his valuable contributions to Islamic Studies and his generous donation to the Institute of his collection of rare Ismaili manuscripts and imprints. Named the Hamdani Collection, it represents one of the most significant collections of Ismaili writings in Arabic, Persian, Urdu, and Gujarati.

Abbas Hamdani was born on 11 August 1926 in Surat, India, into a family of religious scholars. He was educated in India, receiving his BA with Honors from Bombay University in 1945, his LLB from the same in 1947, and his PhD from the School of Oriental and African Studies at the University of London in 1950. After teaching in Pakistan from 1951-1962, and at the American University in Cairo from 1962-1969, he was invited to teach at the University of Wisconsin-Madison (UWM) in 1969 and then appointed to the faculty in the History Department at the University of Wisconsin-Milwaukee in 1970. He retired from UWM in 2001, and moved to Florida, where he enjoyed retirement with his wife until her passing. His last years were spent with his daughter and granddaughter in Bethesda MD.

Abbas Hamdani taught Middle East and Islamic history at UWM, and published widely in the fields of Islamic history and philosophy; Islamic perspectives on the Voyages of New World Discovery; and current events as they related to the Middle East and Islamic world. Hamdani was instrumental in developing programmes in his field and related areas. At UWM he helped to establish and chair committees in Middle East and North African Studies, and in Comparative Religions. He also helped found the American Institute of Yemeni Studies, the Middle East Medievalists, and was active in the Middle East Studies Association. He received numerous grants from the Fulbright Foundation, American Research Center in Egypt and The Institute of Ismaili Studies in London. Eager to connect with the community he lived in, he worked to enhance coverage of Middle East history in Wisconsin high schools; participated in interfaith dialogue; and gave talks on Arab-American affairs. His service in all these areas was recognised by Distinguished Service and Teaching Awards at UWM, Educator of the Year Award and Service awards from the Indian Student Association at UWM and Pakistan Cultural Association of Milwaukee, distinguished Arab-American for Wisconsin by the National Association of Arab Americans, Distinguished Service award from the Middle East Medievalists, and Distinguished Scholar of the Year Award from the Wisconsin Institute of Peace and Conflict Studies. His contribution to interfaith dialogue is addressed in the forthcoming Interfaith Engagement in Milwaukee (Marquette University Press).

A man of charm and impressive erudition, Abbas Hamdani was beloved by family, students, colleagues and fellow scholars, and the many friends he made over a long and eventful life. He was a devoted husband and father, an unflagging support for many family members, an inspiring teacher for legions of students, a willing and generous collaborator for many scholars. He embraced the cause of justice and the oppressed throughout his life, which on becoming an American, he pursued through active civic engagement and community activism. He was a poet, a lover of music, the beauties of which he imparted to his children. He was a generous and kind man, meticulous in corresponding with all he knew through letters and cards. He was in short, a man of virtue, scholarship and service to others and will be greatly missed.

The Muhammad Ali Hamdani Collection, housed in the IIS’s Ismaili Special Collections at the Aga Khan

Library, represents a large segment of the Hamdani family’s library, that has been collected over seven generations by an eminent family of scholars from the Da’udi Bohra

community in India and Yemen. The Hamdani Collection has a fascinating provenance, attested by the many seals and signatures of Professor Hamdani’s distinguished forebears. It represents one of the most significant collections of Ismaili writings and contains some 300 manuscripts and rare imprints in Arabic, Persian, Urdu, and Gujarati. It was Professor Abbas Hamdani, who re-gathered a large portion of his family’s collection, and generously donated them to the IIS for preservation and research purposes.

The IIS publication Arabic, Persian and Gujarati Manuscripts: The Hamdani Collection contains detailed descriptions of the manuscripts in the Hamdani Collection. It explores the content of the works and the codicological features of the manuscripts. The introduction also contains a comprehensive history of the Hamdani family. An e-book of this publication can also be downloaded from our eBooks page.