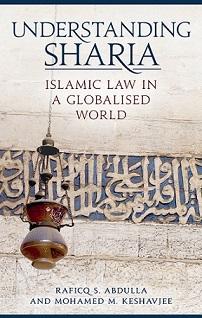 In recent times, there have been a number of misunderstandings and misconceptions around Sharia

or Islamic law in both the Muslim and non-Muslim worlds. Understanding Sharia: Islamic Law in a Globalised World is helping to bridge this knowledge gap and to make a positive contribution to the much-needed conversations on understanding the origins and evolution of sharia in the context of the history of the Muslim peoples. The authors, Raficq S. Abdulla and Mohamed M. Keshavjee, with a good degree of reason, clarity and understanding, have approached complex topics — from Islamic finance, human rights and corporal punishment, to FGM, crimes of honour, forced marriage, and issues associated with bio-medical ethics. A review by David Gardner, International Affairs Editor of the UK’s Financial Times described Abdulla and Keshavjee’s work as “rich and important” and “lucidly argued and accessibly written.”

The book takes readers on a journey from pre-Islamic Arabia to the present, pointing out that even though less than ten percent of the Qur’an

contains verses of a strictly legal nature, there has been a body of law evolving over the course of centuries since the time of the Prophet. In her book review in the South African Mail and Guardian, Zubeida Jaffer, a respected journalist, author and activist wrote: “The book drew me in like I never expected. It allowed me to learn about the ethical underpinnings of sharia flowing from the Qur’an and the myriad of twists and turns the laws took in different countries over the past 1400 years since the birth of Islam. It also helped me understand the interplay between local customary law and Sharia and how adjustments were made to accommodate the good functioning of different societies.”

Throughout the book, the authors raise a number of relevant questions that require thought-provoking and pragmatic debates. One such debate is whether Muslims need to initiate a new approach to an understanding of law combined with ijtihad (reflection and contextualisation in legal matters) in order to fully appreciate and value Sharia’s wider remit in society today. Writing about the book in the ADR Institute of Canada's prestigious Canadian Arbitration and Mediation Journal, Vol. 28, No. 1, Max Blitt, QC, states: “The authors discuss Sharia and human rights and make the point that Islamic scholars working in Western academic institutions of higher learning are able to critique Western notions while developing a human rights discourse from an Islamic point of view which highlights the higher purpose of Sharia (maqasid)... Finally, the authors argue, that Sharia contains a degree of flexibility, supported by doctrines such as maslaha (public interest) maqasid (purpose), and darura (necessity) but emphasize that ongoing interpretation of texts lies at the heart of all religions as well as laws –secular and religious.”

As a purposeful, clear and accessible publication, Understanding Sharia: Islamic Law in a Globalised World, has resonated with a diverse range of audiences across the world. It has received positive reviews and commentary in influential, popular and specialist press, helping to generate conversations about difficult topics whilst situating sharia within the context of the history of the Muslim peoples, as well as within the interfaces between Muslim, Western and other countries today.

To learn more about the book or to read the international reviews in full, visit the publications page.