A New Generation of Thinkers and Researchers 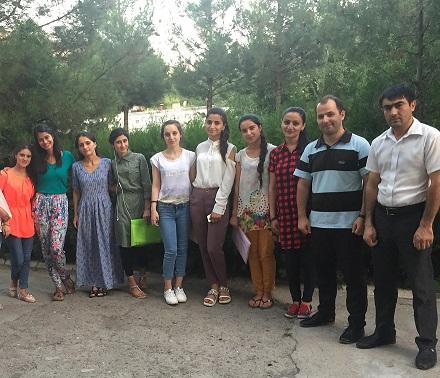 Third-year students of the Graduate Programme in Islamic Studies and Humanities (GPISH) presented their field research projects to staff and students at the IIS. These annual presentations provide students with an opportunity to share their experiences and findings as well as exchange ideas and receive feedback. The field research project - which is a mandatory requirement for GPISH - is undertaken by the students in the summer term, during their second year of study. Students select their topics, based on their research interests, which are also consonant with the scope and mission of the IIS.

The uniqueness of the programme provides individuals with the ability to travel to different parts of the world, apply some of the theories and research methodologies they have learnt about and used while on the programme and create an immersive and valuable learning experience – which enables them to gain first-hand exposure to the global communities that they learn about inside the classroom.

Hasina Daya from Canada, conducted her research on A Case Study of the Ismailis of Khujand: Examining Integration and Social Identity Among Ismailis Living Outside of Badakhshan. Reflecting on her learnings inside and outside of the classroom, she said:

“The study was extremely enjoyable, I experienced Pamiri hospitality first-hand and noted how strong the oral tradition is with Tajik Ismailis. Particularly, the languages of Badakhshan, and the way in which the speaking of these languages, the associated music and dance, bind the community culturally. GPISH is more than just the classroom. It is also about the settings you are in, and the conversations you have with your peers. Primarily the skills gained in GPISH equipped me to work in a cross-cultural context. Interacting with my Tajik classmate, and peers at the IIS inspired my pull to Tajikistan which kicked off my research in the first place. The research methods course with Dr Rezaee equipped me with the ability to consolidate long interviews into a cohesive report with semi-conclusive findings. Also, Dr Halani’s course on ‘Ismailis in Modern Times’ and Dr Daftary’s course on ‘Key Moments in Ismaili History’ were absolutely the necessary background I needed to enter the context.”

Gulrukhsor Aknazarova from Tajikistan, conducted her research on Migration and the Challenges of Accessing the Labour Market: Case Study of the Tajik Ismaili Migrants in New York, USA. Her research idea was inspired by a module she attended - Ismailis in Modern Times - during her second year on GPISH. Speaking about her findings, she said:

“The most recurring theme of the research was the importance of various forms of networks, based on family, ethnic, religious and social ties in the integration process. These networks help the migrants not only to integrate in the labour market but into society in general, creating a home away from home. Key challenges in the integration process consisted of having the required level of knowledge of the host country’s language, absence of education or training obtained in the host country and work experience from the host country.”

This research opportunity helps students to dig deeper and understand some of the root causes through the broader lens that GPISH provides in the first two years of study. Gulrukhsor went on to further find that despite the challenges and barriers, the migrants were constantly striving for and embracing all of the opportunities that came their way – in an effort to improve the quality of their life. Furthermore, their overall attitude towards any barriers in accessing the labour market were perceived positively, as the migrants refer to their being of ‘a temporary nature’.

Some students also undertake research using primary source manuscript materials, which are often one of a kind or rare, all around the world, including those in the Institute’s library collection. Hasan Alhawat from Syria who conducted his research on the Social History of the Fatimid Caliphate

: The Function and the Significance of Civil Society in Cairo commented that his academic curiosity on the subject pushed him towards his area of study and how the programme helped him to acquire additional knowledge and build critical thinking skills. Hasan said:

“An interdisciplinary approach to the material of Islamic history and thought is one of the core values of the GPISH programme. Adopting this approach in history has made me more critical in analysing different secondary and primary resources. Although there has recently been a significant effort by scholars to document the Ismaili history, the focus has hitherto been on writing the history of the elite and the political and military aspects of the Fatimid caliphate. This has shifted the attention from ordinary people, their lives and their participation in the Fatimid state, which is the subject of my research. This way of thinking about history has been improved through studying the GPISH programme.”

GPISH students spend two years in London at the IIS on a Masters-level course in Islamic Studies and Humanities that adopts an interdisciplinary approach to the study of Islamic civilisations. The programme aims to prepare students to embark on a Master’s degree at a British university, and the field research they conduct during the summer term in their second year represents the culmination of this preparation – contributing towards the formation of students as thinkers and researchers.

Research titles from the Class of 2018: