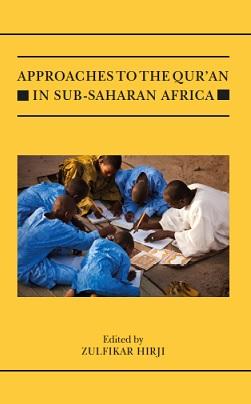 and Islam stretches back over several millennia. In fact to 616 CE, when a number of the Prophet Muhammad’s followers, who were fleeing persecution in Mecca, sought refuge in the lands of present-day Eritrea and Ethiopia. It was also in sub-Saharan Africa that the words of the Qur’an were reported to have been uttered for the first time outside of the Arabian Peninsula. From that initial contact to the present-day, Islam has burgeoned in that region, so much so that a statistic by the Pew Research Center from 2010 showed that one-third of the world’s estimated Muslim population resides in sub-Saharan Africa.

In spite of this, there has been relatively little Western scholarship on Muslim societies and the Qur’an in Africa. Dr Zulfikar Hirji, Associate Professor at York University, seeks to rectify this in his edited volume, Approaches to the Qur’an in Sub-Saharan Africa, published by The Institute of Ismaili Studies and Oxford University Press. Dr Hirji explained:

“This is the first comprehensive compilation of studies on this subject and provides new directions in thinking about Islam and Muslims in sub-Saharan Africa and the multiple ways in which the Qur’an is understood in Muslim life.”

Dr Hirji expands on this notion in his introduction to the book, where he writes:

“Relative to the length of Islam’s presence in the region and the ubiquity, growth and diversity of Muslim communities therein, Western scholarship of Islam and Muslim societies in sub-Saharan Africa has been, until recently, fairly limited. Scholars from various disciplines trace this dearth of knowledge back to the age of European imperialism and its late nineteenth century. At this time the Western European imagination, based on the accounts and reports of explorers, missionaries and academics, among others, conceived of Africa, particularly sub-Saharan Africa, as a Dark Continent populated with primitives who possessed no history and lived outside of civilisation.”

To give a panoramic perspective, Approaches to the Qur’an in Sub-Saharan Africa scans four centuries, from the eighteenth century to the early twenty-first century, across a variety of sub-Saharan locations, including Burkina Faso, Kenya, Mali, Niger, Nigeria, Senegal and Tanzania. The book’s twelve case studies are written by experts in the fields of art, history, linguistics, and anthropology, thereby providing varied sociocultural viewpoints through which to understand sub-Saharan engagements with the Qur’an. The case studies shed light on a wide range of subjects including, manuscripts; Qur’anic commentaries; translations; recitations and invocations; music and poetry; magical squares and symbolic repertoire; medicinal and curative acts; textiles, ink, paper, and wooden boards; spaces of education, healing and prayer, as well as spaces of dreams and spirit worlds. As such, the volume moves well beyond the materiality of the Qur’an as a physical book, to explore the ways in which the Qur’an is understood, felt and imagined, whilst also delving into the contestations and debates that arise from these diverse engagements.

Reflecting on the style and approach of the book, Dr Anne Katrine Bang, Professor of History in the Department of Archaeology, History, Cultural Studies and Religion at the University of Bergen, observed:

“This volume is both timely and thorough, and also broad in scope. Here, the Qur’an is not only approached as a text expressed in different languages and writing styles, but also as a teaching tradition, and as a source of healing and of prestige. The book is also temporally broad in that it discusses not only present-day usages of the Islamic revelation but, as well, examines developments from the eighteenth century. Likewise, it consists of chapters drawn from diverse fields such as social anthropology, history, linguistics and religious studies. Not least, this volume is geographically broad, covering a wide range of countries and languages in East and West Africa. ‘Approaches to the Qur’an in Sub-Saharan Africa’ will without a doubt be a very welcome addition to the study of Islam and Islamic intellectual traditions in Africa.”

Approaches to the Qur'an in Sub-Saharan Africa opens up new discourses about the plurality of engagements within this geographical and socio-cultural context. The book not only adds to the growing scholarship on the Qur’an, but also enables the general audience to expand their knowledge on Islam and Muslims in Africa.

To learn more about the book and to read Dr Hirji’s introduction, visit the publications page.