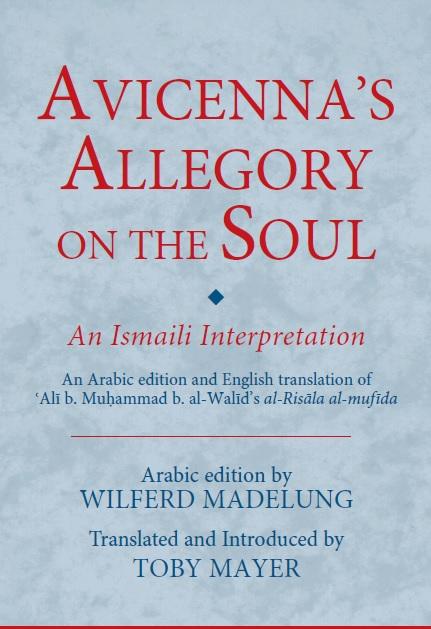 Avicenna's Allegory on the Soul is a rare Ismaili publication written in medieval Yemen.  It is the first time that this publication has been translated and made available in a printed edition. As a noteworthy addition to the Ismaili Texts and Translations Series, the volume combines a critical edition of the original Arabic text with a parallel English translation and an extended introduction.

Within the numerous writings that he left for future generations, Ali Ibn al-Walid (d. 1215 CE) - the fifth chief da’i of the Tayyibi branch of Ismailism - composed a detailed commentary on a poem traditionally attributed to Ibn Sina (d. 1037 CE, widely known in the West as ‘Avicenna’). At twenty lines long, the ‘Poem of the Soul’ (Qasidat al-nafs

) is considered to be a short prose, which abounds in thought-provoking imagery, as the philosopher uses the analogy of a dove to symbolise the human soul. In his writings, the dove has lost its way and forgotten its true home. The dove’s retrieval of its homing instinct is a metaphor for spiritual awakening.

In the introduction, considerable space is given to a discussion on the significance of allegorical texts attributed to Ibn Sina in the context of his wider thought. In his commentary, the Ismaili thinker Ali Ibn al-Walid has explored all the details of its imagery from the viewpoint of Ismaili cosmology and psychology, as per the Ismaili tradition during the medieval period in Yemen. The haqa’iq

system in this tradition had developed the teachings of the great Fatimid philosophers and the Rasa’il Ikhwan al-Safa’ into a new synthesis.

According to Ibn al-Walid, the intimately personal level and the vast cosmological level merge. Individual souls may truly assist the world-soul by living in a high-minded and spiritual way while they are embodied on earth - by which the commentator primarily means that individuals should live as faithful members of the da‘wa

, as articulated in the translator’s introduction:

“The last line of the poem likens the dove in her speedy departure, to ‘lightning flashing in the sanctuary’. Ibn al-Walid interprets the sanctuary here to mean the human body. The soul makes her appearance within the matrix of the latter, like a fulgurating light, shining all too briefly while the period of life runs its course.

According to the commentator, the real intent of this metaphor is not descriptive but hortative: Ibn Sina is urgently ‘directing the foremost to get provision for the Day of Return’... [the commentator] adding that Ibn Sina’s allusion to life’s transience is a summons ‘to follow God’s sainted friends and their dignitaries who are the best of creation’, in other words, to submit oneself to the structures of the da‘wa.”

Regarded as one of the most pre-eminent Muslim philosophers, Ibn Sina has had a seminal influence, not only on Islamic philosophy but also on European philosophy. Only a small number of Ismaili thinkers have actively engaged with Ibn Sina’s works – other than Nasir al-Din

al-Tusi and, to an extent, Shahrastani. Therefore, the work of Ibn al-Walid offers invaluable insights into esoteric Muslim thoughts and a deeper understanding of Ibn Sina’s substantial intellectual legacy.

IIS Publishes Second Volume in its Shi‘i Heritage Series
IIS’ Philosophy
IIS Publishes A Code of Conduct: A Treatise on the Etiquette of the Fatimid Ismaili Mission