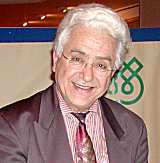 Through this collection of 8 essays, the work proposes new strategies and options in the rethinking of Muslim tradition, seen above all as a living tradition, and opens the way towards a unique view of the history of thought systems in the Mediterranean world. Applying contemporary theories from disciplines such as social anthropology and semiotics to issues such as the frontiers of the rational intellect in the 21st century, the cognitive status of the Qur’an

, civil society and the individual, and authority and power, Professor Arkoun’s approach subjects varying belief-systems, traditions of exegesis, theology and jurisprudence to a critique aimed at liberating reason from dogmatic constructs.

On March 25, 2002 the IIS in conjunction with Saqi Books organised a book launch and signing at the Ismaili Centre, London. The event was attended by academics, media from the United Kingdom and the Muslim world, as well as Professor Arkoun’s past and current students. Professor Azim Nanji, Director of the IIS, introduced and congratulated Professor Arkoun on his important contribution to the field of Islamic Studies. In his talk, Mohammed Arkoun spoke about the importance of critically approaching the study of Islam and shedding inherited dogmas, thus transforming the domain of the ‘unthought’ into a discourse of the ‘thinkable’.

Saqi Books, established in 1984, publishes quality academic and general interest books with a focus on the history, politics, arts, and gender issues of the Middle East and larger Muslim world.