The first image selected by Professor Ormsby was the Mosque of ‘Umar or the Dome of the Rock (Qubbat as-Sakhrah) in Jerusalem. The building was erected between 687 CE and 691 CE by the Umayyad Caliph

‘Abd al-Malik ibn Marwan. Being the first example of monumental architecture by Muslims, the mosque’s location is of importance for Muslims, Jews and Christians. It is believed by Muslims to be the scene of Prophet Muhammad’s ascension to the heavens, known as Mi‘raj

. According to Jewish interpretation, it is believed that the location of the rock is where Prophet Abraham was prepared to sacrifice his son. In its architectural design, the Dome of the Rock appears to be modelled after the Church of the Holy Sepulchre in Jerusalem. 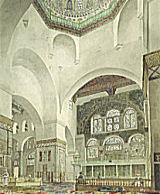 The next image which Prof Ormsby discussed was the Great Mosque in Damascus, Syria, built in 715 CE. Prior to the construction of the mosque, there was a Byzantine

church at that location which, in turn, was built at the site of a Roman temple. Today, the mosque stands as a symbol of religious and cultural harmony. During the reign of the first Umayyad caliph, Mu‘awiya Ibn Abi Sufyan, Muslims shared the church with the Christians. It is believed that the tomb of John the Baptist is located inside the mosque and people continue to pay their respects at this site. 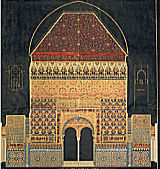 A measured drawing of the Alhambra by William Harvey was another image discussed by Professor Ormsby. This image features one of the towers of the Alhambra called the ‘Tower of the Captive’ (Torre de la Cautiva). It is a combination of geometric design mixed with calligraphy from the Qur‘an and Arabic poetry. The drawing of the ‘Tower of the Captive’ and the Alhambra in general is an important example of Muslim monumental decoration in Europe, and alludes to the many contributions of Muslim civilizations.

Completing his discussion of architectural monuments from the Middle East and Europe, Prof Ormsby also discussed Muslim architecture in India. Amongst the monuments he discussed was the seventeenth-century tomb of the Mughal emperor Akbar who ruled from 1556 CE to 1605 CE.

The tomb is in a large walled garden on the Delhi-Agra road and is an excellent example of the synthesis of different styles of architecture, representing a significant departure from earlier Mughal buildings in India. Professor Ormsby also spoke about the tomb of Safdar Jang, another important example of Mughal architecture which draws its architectural inspiration from the Taj Mahal and Humayan’s tomb of earlier years. The mausoleum sits at the centre of a char bagh, a representation of paradise symbolising peace and tranquillity.