Sciences of the Soul and Intellect, Part I – A New Volume in the Epistles Series 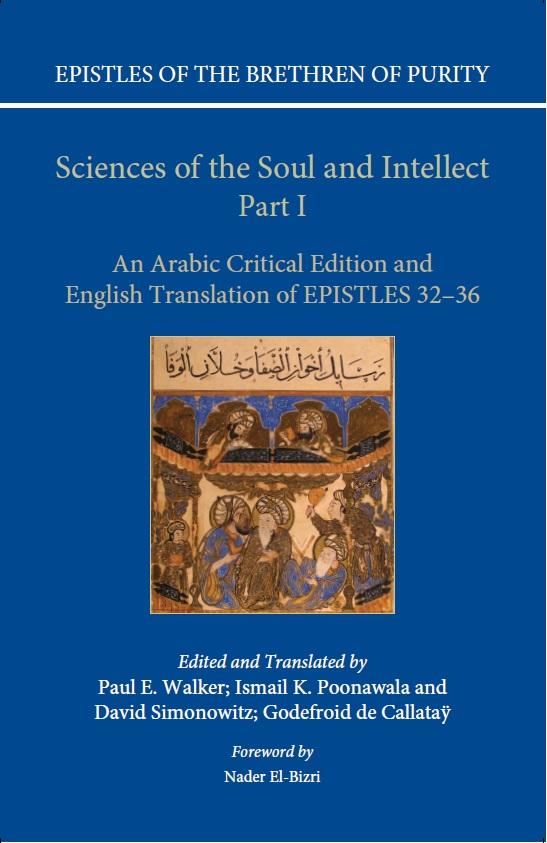 Following on from the recent publication of On Astronomia (Epistle 3), comes Sciences of the Soul and Intellect, Part I; An Arabic Critical Edition and English Translation of Epistles 32-36. As with the previous volume, here we find a strong cosmological orientation, with a particular focus on the relationship between microcosm and macrocosm, earthly and celestial. Whereas Epistle 3 belonged to the section of the Rasa’il dealing with mathematical sciences, the five Epistles of the present book are located within the section on Sciences of the Soul and Intellect, Part I. As such, the content is more metaphysical and abstract, whilst in a sense also more human.

Epistles 32 and 33 together describe ‘intellectual principles’, which in this case is an explanation of the cosmological hierarchy. The order of existing things is compared to the sequence of numbers, which all rely on the number preceding them for their existence. Linkages are also drawn to the Creator, the source of all things, from which every being derives, beginning with the Intellect (al-‘aql

), which is compared with the number two. The next emanated being is the Universal Soul (al-nafs

), likened to the number three, followed by Prime Matter (al-hayula

al-ula), which is like the number four and henceforth. This ontological scheme is a fine example of the Brethren of Purity’s syncretism, with its obvious Pythagorean, Aristotelian, Plotinian, and Ismaili influences. The Ikhwan also discuss particular numbers at some length, giving examples of things that occur naturally in sets of two, three, four and up to nine.

Epistle 34 develops the philosophical system further, illustrating the intimate relationship between the celestial realm and the mundane world, at the intersection of which sits the human being. The mirroring of microcosm and macrocosm is a key theme of the Ikhwan, and we find it pervading the Rasa’il.

Essentially, Epistle 35 is the Brethren’s epistemological Epistle. By way of a foundational digression, we find discussions on the meaning of existing and not existing, of matter, form and accidents, and of cause and effect. Of the specific intellectual faculties of an individual human soul, which we are told are innumerable, the Brethren then concentrate on the following five: the contemplative faculty, the imaginative faculty, the memorising faculty, the articulating faculty, and the productive faculty.

Epistle 36 is thoroughly astrological, taking as its theme the influence of celestial revolutions on the ‘sub-lunar sphere’, the Earth and all on it. The Brethren draw heavily on Ptolemaic astronomy as well as on the Indic and Persian traditions, amongst others, in their description of celestial alignments and the effects these have on the beings below. Just as the heavenly bodies revolve through space, earthly beings move through time. For the Brethren, time, as demonstrated by history, is therefore cyclical, from the changing of seasons to the rise and fall of empires.

The purpose of the Brethren’s explanations is to evoke readers to the reality of how things are, realise that our ultimate goal is to ascend to the level of angels, and set about achieving this. Knowledge is never merely for the sake of knowledge, but to lead human beings out of the prison of matter and towards a divine state.

Sciences of the Soul and Intellect, Part I is the ninth volume in the Series, and will be followed by a further eleven volumes to complete the corpus. This publication is the first volume of the Series to contain Epistles that were worked on separately by the scholars involved, and, from an academic viewpoint, it is especially interesting to see the different approaches taken by the editors and translators with their respective Epistles. Each editor has given a contextual introduction to their Epistle(s), considering different aspects of the Brethren’s fascinating conception of the universe and the human being’s role within it.

Whilst this book will be of significant value to experts in the field, it would also make a good entry point for any general reader who is curious about this popular medieval work and the philosophical framework of the mysterious Brethren of Purity.