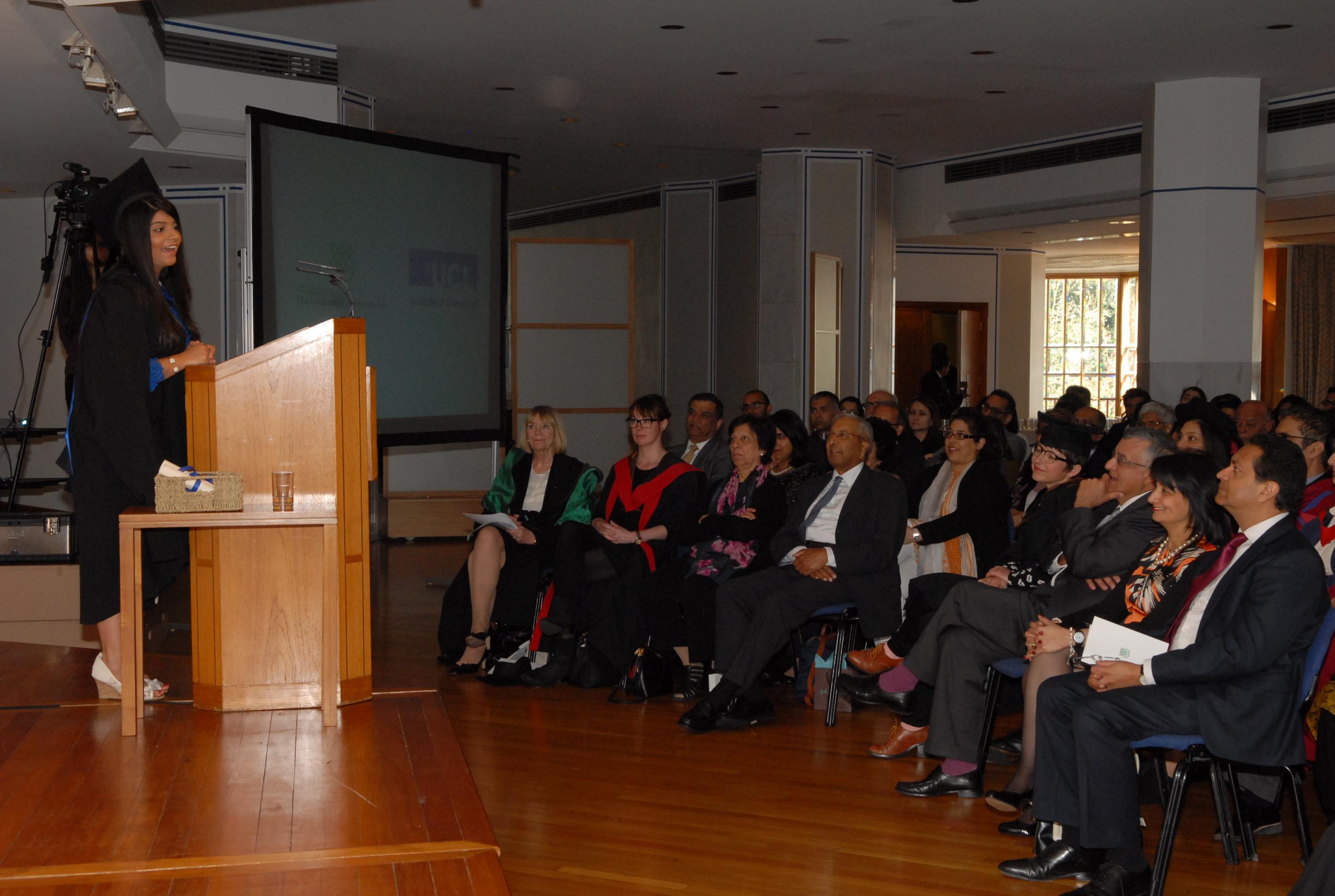 The graduation ceremony for the sixth cohort of the Institute’s Secondary Teacher Education Programme (STEP) was held on 11th April 2015 at The Ismaili Centre, London. Students from Canada, India, Pakistan, Portugal, Syria, Tajikistan, Tanzania, United Arab Emirates, the United Kingdom and the United States of America graduated at the ceremony with a double Master’s degree: an MA in Education (Muslim Societies and Civilisations) and an MTeach (Master of Teaching). Both of the degrees are awarded by the University College London, Institute of Education.

An engaging commencement address was delivered by Professor Abdou Filali-Ansary, the founding Director of the Aga Khan

University, Institute for the Study of Muslim Civilisations (2002-2009). He reminded the graduates of the importance of their responsibilities as secondary level teachers, given the challenging environments in which we live today. He further added:

“What is remarkable about the programme that you have undertaken is that it attempts to bring back interaction between the study of a religious heritage and the humanities in a way that makes it possible to understand and situate Muslim traditions within broader contexts - and enables members of Muslim communities to interact positively with their world, with other communities, and also, most certainly, with their own heritage.”

Dr Farhad Daftary, Co-Director at the IIS, and Professor Lesley Gourlay, Head, Department of Culture, Communication and Media at the IOE, presented the graduates with their certificates.

Speaking about her journey, this year’s valedictorian, Reshma Shariff, from Tanzania, said:

“I know from my experience as a student that religious education is not a subject many students enjoy. I have always believed it is a subject which should provide the opportunity for questions that may not always be comfortable and straightforward to answer, and that engaging with such questions helps students to form their understanding of the world, develop a sense of identity both individually and as part of a community – it also enables them to appropriately speak and respond in inter-faith dialogue. It was clear to me that the approach a teacher took would determine how far a student would go.”

Nausheen Hoosein, from the USA, provided a reflection piece on behalf of the cohort, commenting as follows:

“The art of reflection was a reoccurring practice as STEP students and teachers. We soon came to realise that STEP dwells in the heart of London, not only to give its students access to two leading Institutions of study, but to provide students with the cultural, artistic, and historical nuances of the city.”

Nausheen concluded her speech with an excerpt from His Highness the Aga Khan’s graduation address during the IIS’ 25th anniversary, where he had said:

“It is my hope and prayer that the education and training that you have acquired will enable you to assume positions of leadership in your communities, countries and even beyond. I believe that your continuing relationship and dialogue with the Institute will enrich your role as potential agents of change, while also extending to the Institute the benefits of your experiences and insights.”

The ceremony concluded with a musical interlude by Deleelah Abdullah and Katarina Mercinger, who provided the audience with an inspirational and soulful performance that encapsulated the journey that lies ahead for the graduates.

The graduates will now serve as secondary level religious education teachers and will deliver the Institute’s Secondary Curriculum in their home contexts.