STEP Graduation Ceremony for the Class of 2015 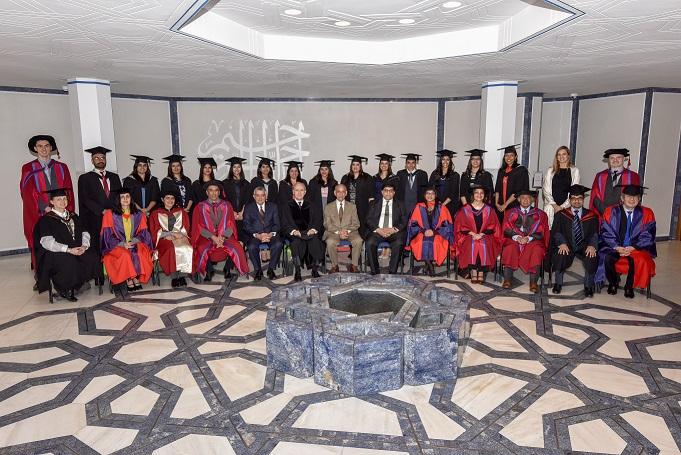 The graduation ceremony for the seventh cohort of the Institute’s Secondary Teacher Education Programme (STEP) was held on 9th April 2016 at The Ismaili Centre, London. Thirty students from eight different countries graduated at this ceremony.  Students from Canada, India, Pakistan, Tanzania, Tajikistan, the UK and the USA graduated with a double Master’s degree: an MA in Education (Muslim Societies and Civilisations) and an MTeach (Master of Teaching). Dr Farhad Daftary, Co-Director at the IIS presented the graduates with their certificates, which are awarded by the University College London, Institute of Education (UCL IOE).

Sana Kabira, from India, received a double distinction in her MA and MTeach degrees, as well as the Outstanding STEP Student award for her exceptional performance during the two year programme. A further four students achieved a distinction in either their MA or MTeach degree. The success of the graduands was a testament to the remarkable achievements and dedication of both the graduands and the faculty at the IIS and the UCL IOE.

An engaging commencement address was delivered by Professor Kamal Abu-Deeb, Chair of Arabic at the University of London. He reminded the graduands that,

“…people actually do not live by fixed meanings in fixed texts, but live by interpretations of these texts. And interpretation is a complex, personal as well as social and historically conditioned act, which is evident in the fact that we have over the centuries had so many conflicting interpretations in our own cultures that have produced situations wherein a ‘valid’ interpretation is established only by power: he who is more powerful imposes his own interpretation at a given moment in time and in a given place, that remains valid as long as its champion possesses the power to impose it.”

Rosalind Janssen delivered a message on behalf of Professor Norbert Pachler, Pro Director for Teaching, Quality and Learning at the UCL IOE:

“Most of you will have embarked on this learning journey with the explicit aspiration to make a difference in the lives of young people. This requires passion and real commitment which you have shown during the last two years. Whilst today is an opportune moment for reflection on your achievements and for celebration, I am certain you appreciate today is also only a way station in the lifelong process of professional learning.”

Speaking about her journey, this year’s valedictorian, Sana Kabira, from India, said:

“For me, STEP was a journey of self-transformation. It began when I realised my passion for teaching and desire to serve as a professional RE teacher. Just like the caterpillar ceases its daily life and constructs a cocoon to structure the change, I had to separate from my family and settle into a new country.”

On behalf of the cohort, Samreen Anwar Ali, from Pakistan, shared a reflection on their future aspirations:

“We have learned and go out from this place with passion, with strong determination to use our knowledge and skills and our roles as  educators to make a difference in the life of every single student we teach but, beyond that, we hope to create together a world in which diversity of cast, colour, race, religion, nationality and gender is appreciated and celebrated, the ethic of generosity and brotherhood is valued, where the meaning of Islam will be valued in its diversity, where each individual holds the right to think, question and search for themselves and thus use their intellect and become ‘ethically literate’.”

’s address at the 25th graduation ceremony of the IIS in 2003, in which His Highness had said:

“It is my hope that it will be these new generations of our intelligentsia, who, driven by their own knowledge and their own inspiration, will change their own societies and will gradually replace many external forces who today appear, and indeed sometimes seek, to control our destinies.”

The graduates will now serve as secondary level religious education teachers and will deliver the IIS’ secondary Curriculum in their home context.