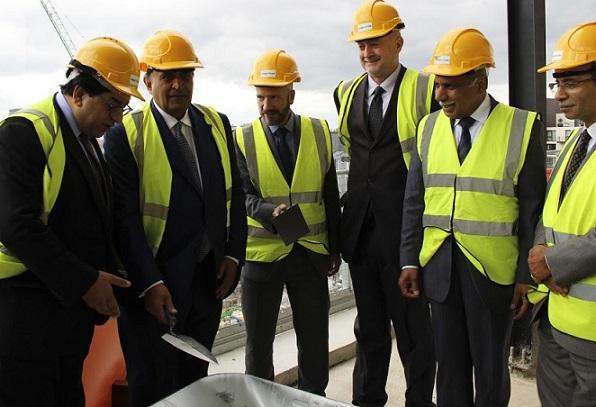 5 June 2017 marked a symbolic milestone in the construction of our new academic building in King’s Cross, as the final piece was laid to the outer structure of the building in a ‘topping out’ ceremony.

'Topping out' is a builders' rite traditionally held when the last beam (or its equivalent) is placed atop a structure during its construction. It is part of an ancient European tradition that was said to bring good luck and ward off bad spirits. The ceremony also provides an opportunity to reflect on and celebrate the progress that has been made, before the internal building work commences.

Development Network began conversations about building a signature architect building with the King’s Cross Central Limited Partnership and Argent LLP teams - who are responsible for with redeveloping the King’s Cross area - over a decade ago. The developers were able to understand and translate into reality His Highness’ the Aga Khan’s vision of creating a permanent home for The Institute of Ismaili Studies (IIS), The Aga Khan University’s Institute for the Study of Muslim Civilisations (AKU-ISMC) and the Aga Khan Foundation (AKF UK).

Reflecting at the topping out ceremony, David Walters from the developers Argent LLP said:

“It took real vision at that point in time to commit to King's Cross the way the AKDN have and for that I would like to say thank you for embarking on this ten year journey with us. [The AKDN] have played an important role in shaping King's Cross and I am sure you will play a long standing role as we complete this building and move forward.”

Speaking about being part of the regeneration development at King’s Cross, Naguib Kheraj from the IIS Board of Governors said,

“We were excited about the prospect of being part of the transformation plan...How different it looks today even though it is partially complete – it is a vibrant, thriving and attractive new district of central London. We can see now the splendid form of what will be a beautiful Maki designed building with a unique set of gardens each inspired by different Muslim traditions from a range of geographic regions.”

The hard work and diligence of the architects and construction teams involved has been phenomenal, as Jim McCormack, Construction Manager at BAM Construction said:

“Currently on site, there are on average 80 operatives working from all trades on any one day. This will now increase to 180 over the next few months. So far, 15000 work days on site have got the building to this stage.”

The contractors will are in the process of mounting the exterior limestone cladding and will install over 200 windows, before moving onto the interior fit out. The signature building will feature a ribbon of green spaces inspired by the rich heritage of gardens from different Muslim contexts. The collection of gardens will be a unique and distinctive feature of the AKDN development.

The ceremony was attended by Gary Kamemoto, Director of architects Maki and Associates; representatives from Argent LLP; architects from Allies & Morrison; key representatives from our contractors BAM Construction; numerous specialist consultants and contractors from Expedition, Arup, and Gardiner and Theobold; the General Manager at AKF; the Director of AKU-ISMC; the CEO of AKF UK; The IIS Board of Governors; AKDN King’s Cross Steering Committee and Project Team; and some of our dear friends and supporters.

It is envisioned that the thoughtful design of the new building and its gardens will lend itself to dialogue and learning, by enabling physical and intellectual connectivity reflecting the core values – pluralism, openness, quality and excellence – of the institutions that will take up residence there.

The building is expected to be ready to move into in May 2018. For the first time, the IIS, AKU-ISMC and AKF UK - all of which were founded by His Highness the Aga Khan - will have a permanent home. It is quite fitting that this is planned to be achieved during His Highness’ Diamond Jubilee year.