Vision, Impact, Legacy: Celebrating the Difference We Make Together 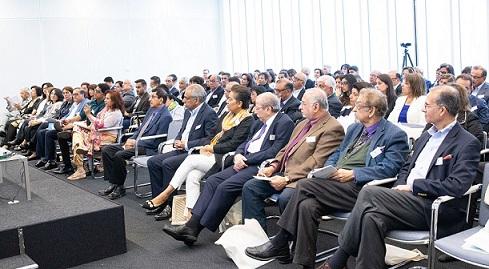 Centre and of IIS moving into its new and permanent home, IIS hosted an educational programme for its friends and supporters during the weekend of 15-16 June. Delivered by leadership, faculty and staff of IIS, the programme provided insights into some of the more substantive areas of IIS’s research, curriculum development and teaching programmes.

In the opening plenary session, guests heard from IIS Governors and Heads of Departments about the interconnectedness of the IIS’s past, present and future. Moderated by Salima Bhatia, Head of Communications and Development, she took supporters on a journey through the past forty one year’s and how IIS has developed into an academically reputable international organisation that is able to respond to the needs of the various communities it serves. Board Members, Naguib Kheraj and Zauhar Meghji spoke about the evolution, scale and impact of IIS over time and geographies, as well its future aspirations. Co-Director and Head of Research and Publications, Dr Farhad Daftary, spoke about the critical role IIS has played in deconstructing centuries old myths about Ismailis which were rooted in either the hostility of certain polemicists or the ignorance of historians at the time, who sought to fabricate stories such as the Assassin Legends. Through its research and publications programme IIS has been able to set the historical record straight particularly through two of its publications series, the Heritage Series and the Texts and Translations Series in which newly recovered primary and secondary sources have been translated and studied. The recovery, access and study of these texts have today opened up and informed scholarship in the academic field of modern Ismaili Studies. Dr Shiraz Thobani, Head of Curriculum Studies, provided an overview of the evolution of the primary and secondary curriculum. In addition he spoke about the department’s new area of focus, the development of early childhood materials, which will concentrate on the religious, moral and cultural education of zero-six year olds. And Dr Laila Halani, Head of Graduate Studies, told the audience about the signing of a new validation partnership between IIS and SOAS University of London, and how our continued focus on quality has meant that today even external agencies who review and audit quality standards across the UK have concluded that IIS meet the highest standards for a higher education academic institution.

Faculty members - who are all IIS alumni - showcased how new knowledge in the study of Islam is being generated through research which moves beyond the more classical research genres that IIS is well known for, to areas of greater contemporary relevance. The Muslim Biomedical Ethics session showcased some ground-breaking research which is being undertaken on how to approach and think ethically about issues such as abortion and end of life matters. An interactive session examining the multiple roots and histories of Islamophobia explored the connections to populism, social media, and dogmatic interpretations of the faith. The research into the diversity of Muslim Spaces of Gathering and Worship was shared with attendees alongside the focused treatment that this area of research is receiving in the Faith and Practice in Islamic Traditions secondary curriculum module. Visitors were also treated to an experiential journey with A Glimpse into our Heritage through the rare treasures - manuscripts, documents, artefacts and photographs - housed in the Ismaili Special Collections, including the stories embedded in them and how these precious items inform the IIS’s current research projects, publications and curriculum materials. Supporters were also able to enjoy and explore the magnificent building with a guided tour of the Aga Khan Library and the six gardens, courtyards and terraces inspired by various regions of the Muslim world.

After experiencing the architectural beauty of the Aga Khan Centre during the day, guests had the rare opportunity to hear from the internationally acclaimed architect, Farshid Moussavi, at the Gala Dinner, who has been appointed by His Highness the Aga Khan to design the new Ismaili Centre in Houston. Farshid spoke about her journey as a British-Iranian woman in the field of architecture, her role as the Chair of the Master Jury of the Aga Khan Award for Architecture, as well as being a member of its Steering Committee for over a decade, providing guests with a deeper appreciation of the role and value of architecture in our everyday lives.

The following day, guests had the option to experience the vibrancy and dynamism of London’s cultural life through a choice of activities. The ZEE Jaipur Literature Festival at the British Library was an opportunity to hear IIS alumnus Dr Zulfikar Hirji – co-author of the Diamond Jubilee publication Islam: An Illustrated Journey – speak on a panel discussion sponsored by IIS and AKF UK, entitled, Islamic Arts: Multiple Histories, Multiple Expressions. There was also a private tour of the new Albukhary Gallery at the renowned British Museum, where the curatorial team included IIS alumna Dr Fahmida Suleman, who is now based at the Royal Ontario Museum. Current IIS students provided visitors with a tour of the prize winning Stanton Williams designed student residence, Victoria Hall where they live in King’s Cross. While others received a guided tour of the Jameel Gallery at the Victoria and Albert Museum and the Ismaili Centre, London.

IIS supporters who participated in this two-day programme said that they came away with a deeper understanding of the institution they so generously support, and a keener insight into how their contributions have informed initiatives and activities which have a transformative global impact.

Watch this video to learn more about what the IIS does and the impact of its work.