Alex has overall operational responsibility for the three-year Graduate Programme in Islamic Studies and Humanities (GPISH).  This includes strategic planning and design, student admissions and progression, recruitment of lecturers, and oversight of curriculum and assessment for the two-year MA validated by SOAS.  He is the first point of contact for students on academic matters and is on hand for consultation by teaching staff.

Alex has taught across themes of religion and politics in Islamic and Middle Eastern Studies, as well as theory and method in the Study of Religion.  Before coming to the IIS he was a lecturer at Oxford's Faculty of Theology & Religion (2016-20).  He previously spent four years in the US, first as a doctoral research fellow at Harvard's Center for Middle Eastern Studies (2012-14) and then as the inaugural American Druze

Foundation Fellow at Georgetown's Center for Contemporary Arab Studies (2015-16).  He has also served as a visiting professor at Qatar University, George Washington University, and Middlebury College's Arabic Summer School.  Alex studied at Durham University for his BA (2006) and MA (2007), at Manchester University for his PhD (2014), combined with Arabic studies at Edinburgh and Damascus Universities and the Qasid Institute in Amman.

As an anthropological historian of Islam in the modern Middle East, Alex is interested in how changing conceptions of ‘religion’ have contributed to the institutionalisation of Islam and sectarianisation of Middle Eastern societies.  He has conducted fieldwork in Lebanon and Jordan, supported by visiting fellowships at the American University of Beirut, Notre Dame University Louaizeh, the Brookings Doha Center, and the British Institute in Amman.

Alex is an associate member of Oxford's Faculty of Theology & Religion, through which he coordinates an interdisciplinary research network on "Categories of Religion and the Secular in Islam" (CRSI.theology.ox.ac.uk). 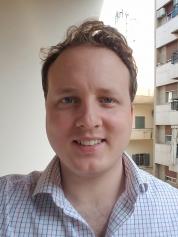