Arzina R Lalani received her doctorate in 1988 from the Department of Arabic and Middle Eastern Studies, University of Edinburgh. Formerly a recipient of the Institute's Visiting Research Fellowship (1999-2000) she is currently a Research Associate at the Institute of Ismaili Studies, London. A specialist in early and medieval Arabic Literature, she focuses on multi-dimensional aspects of Shi'i thought. Her work Early Shi'i Thought: The Teachings of Imam Muhammad al-Baqir (London, 2000) won prestigious literary awards in London and Iran. Following peer reviews and translations in several languages, the work is now available in paperback (London, 2004). Her recent publication Degrees of Excellence is a bi-lingual work on an Arabic manuscript on Leadership in Islam from Fatimid times, the Kitab Ithbat al-Imama

A regular contributor to several Encyclopaedia articles and a member of the editorial board of The Qur'an: An Encyclopaedia, Dr Lalani is presently working on a monograph Exegetical Perspectives on Leadership in Islam based on a range of commentaries from diverse schools of thought in Islam.

Dr Lalani has a wide and varied teaching experience. She has previously taught Hadith

literature at the Faculty of Oriental Studies, University of Cambridge, served as a mentor in Arabic at DeMontfort University and lectures on Shi'i Studies at The Institute of Ismaili Studies. She presents within the different constituencies in the community and has chaired and organized panels in national and internationalconferences including BRISMES, MESA and WOCMES. Convener of a Shi'i Studies Symposium (April, 2004), she continues to network and foster opportunities for scholars in the field to share research interests and developments. 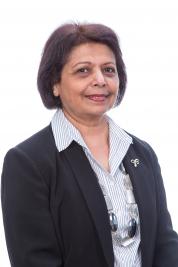