William Rees Hofmann recently received his PhD in Music from SOAS, where his research centred around the history of music and performance practices between the Sufi environments and the Sultanate

courts of early modern South Asia from the thirteenth to sixteenth centuries, with a special focus on Sufi poetry and song in early Hindi.

William is also a multi-instrumentalist specialising in both the Indian Sarod and the Afghan Rubab. He earned a BA in Hindustani Vocal Music from the Maharaja Sayajirao University of Baroda in Gujarat, and also holds an MMus degree from SOAS in Sarod and Rubab Performance. William has performed internationally both solo and with Jāmi Ensemble, as well as run workshops on the classical music of Kabul. He has also recently been granted a Senior Performing Arts Fellowship (now postponed) from the American Institute of Indian Studies to turn his doctoral research on early Sufi song text collections into a performance and lecture/demonstration along with Jāmi Ensemble. 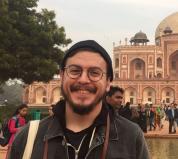