Dr Hakim Elnazarov has been the Coordinator of the Central Asian Studies Unit (CASU) at The Institute of Ismaili Studies (IIS) since 2006. He had originally joined the IIS in 2003 as a Research Fellow.

He received his Ph.D from King’s College London in the history of empires. His thesis analyses the Anglo-Russian rivalry in the Pamirs and Hindu Kush and the role of the Ismailis of Central Asia in the Great Game.

Dr Elnazarov completed his graduate studies at the Faculty of Oriental Studies of the Tajik State University in Dushanbe, Tajikistan, where he specialised in Islamic Studies. He then obtained a Master of Education from the Institute for Educational Development (IED) at the Aga Khan

University (AKU), Karachi, Pakistan. He has also worked in various capacities in higher education in Tajikistan and East Africa.

His research interests include the history and intellectual heritage of the Central Asian Ismailis, Islamic education in Central Asia, and the languages and culture of the mountain societies of Central Asia.

Dr Elnazarov has edited a number of books and has published articles and book reviews on various topics, including the history and traditions of the Central Asian Ismailis, religious education and languages and gender issues in Central Asia. Dr Elnazarov is a co-editor of ‘Endangered Languages and History’ and ‘Russian Scholars on Ismailism’, the proceedings of the international conferences sponsored by the IIS in Tajikistan and St Petersburg, Russia, in 2009 and 2013 respectively. He is also a general editor of the Russian and Tajik publications of the IIS. Apart from teaching at the IIS, he has presented papers at conferences and organised a number of international conferences and seminars in the UK, Russia, Kyrgyzstan and Tajikistan. Dr Elnazarov is a member of the executive committee of the Foundation for Endangered Languages and is engaged in various collaborative projects with academic institutions in Central Asia and Russia. 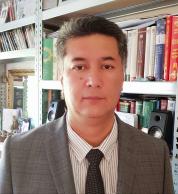