Alnoor Nathani is the Design and Production Manager for the Design and Production Unit (DPU) in the Department of Curriculum Studies. He joined the Institute of Ismaili Studies in October 1994. His primary responsibility is to manage an in-house design and production unit for the production of the educational publications for the IIS’s primary and secondary curricula which are published in ten different languages. His responsibilities include overseeing the printing of publications in seven countries.

Alnoor has obtained an MSc in Multimedia Systems, in addition to an HND in Computer Studies. He has an interest in contemporary Islamic Art and has had his work exhibited at the Ismaili Centre, London, and published in various publications. He has also designed material for the Institute, including the covers for some of the IIS academic books and various publications produced for programmes such as Expressions of the Pamir (exhibition and concert) and Word of God – Art of Man: The Qur’an 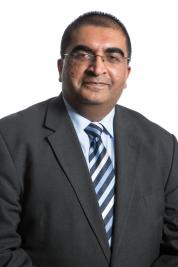