Mr Hussain Jasani joined the Institute in July 2012 as the Manager for Educational Programmes Unit (EPU) and was appointed to establish South Asian Studies (SAS) within the Department of Academic Research and Publications (DARP) in January 2020. Serving as the founding lead of SAS, Mr Jasani has the responsibility of defining strategic vision for SAS, setting its research agenda and overseeing research projects.

In his previous role as the EPU Manager, Mr Jasani provided oversight to the International Training Programmes (ITP for Waezeen and Primary Teacher Educators), and other HR development and educational endeavours for the Ismaili community and AKDN leadership. He conceptualised and successfully launched multiple initiatives such as ITREB Members Training, Post Graduate Research Fellowship, IIS Short Courses and a wide range of continuing education programmes. Since 2007, he has also been associated with the Constituency Studies Unit as a research consultant where he also served as a lead researcher for the Ismaili Rituals from the Indian Subcontinent project.

Before joining the IIS, Mr Jasani served as the CEO of ITREB India. During his tenure (1996-2012), he also worked as the Head of Research and Development as well as its Education wing. He also served as a director on many corporate and not for profit boards during his professional career of over 30 years.

Mr Jasani is an IIS graduate (1994). He obtained his first degree in Electronics and has an MA in Islamic Societies and Cultures from SOAS where he specialised in Islam in South Asia. He also has a Diploma in Religious Education from the Institute of Education, University of London. He is currently studying for his PhD at SOAS.

Mr Jasani has presented academic papers at various universities in multiple continents and conducted HR Development workshops for several governmental agencies, corporates and NGOs in over a dozen countries. The International Penguin Publishing House honoured him with the Rising Personalities of India Award in 2004. Mr Jasani’s contribution to the academic and social sector has resulted in his name being included in multiple editions of ‘Asia Pacific Who’s Who’ since 2000 and in ‘Who’s Who in India’ in 2006. 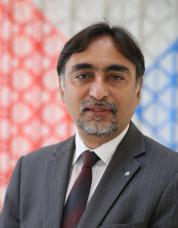