Karim completed his BA and MA in Persian Literature from Ferdowsi University of Mashhad, Iran, in 1999 before pursuing a Graduate Program in Islamic Studies and Humanities at the IIS (GPISH, class of 2004). After GPISH, he completed an MPhil in Islamic and Middle Eastern Studies from University of Cambridge. After graduation, he worked as a translator for the IIS website, and taught Persian at the graduate programmes of IIS and AKU-ISMC (Aga Khan

University–Institute for the study of Muslim Civilisations).

In 2014, Karim joined the Persian manuscripts cataloguing project at the Aga Khan Library and, in 2018, obtained his PhD on ‘Qiyama in Ismaili History: A Study on the Proclamation of Resurrection and its Historical Context’ from SOAS. He is currently working with the IIS-Ismaili Special Collections Unit (ISCU) where he is editing and translating a number of new Persian Ismaili texts from the Alamut 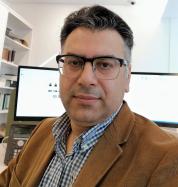