Rizwan Mawani is an educator, scholar and research consultant with experience in more than 30 countries. He has a background in anthropology and religious studies with degrees from Carleton University in Canada and the Graduate Theological Union in the United States. His research focuses on Muslim diversity and pluralism with specific reference to spaces of worship, ritual practice and forms of religious authority.

Rizwan has conducted field research with more than 50 Muslim communities across 17 countries and numerous cultures from Senegal and Iran to China and Indonesia. His research spans the range of Muslim identities from Sunni and Shi’a Muslim to Sufi and mystically inclined communities that transcend traditional theological divides. His work also includes communities that choose to define themselves outside the Shi’a-Sunni boundary including groups such as the Ibadis

, Alevis and Zikris amongst others.

His extensive research and knowledge of the contemporary Muslim world and its living traditions has made him a sought-out speaker for audiences ranging from policy-makers and government departments to students, interfaith audiences and Muslim communities.

Previously, Rizwan was Research Coordinator in The Institute of Ismaili Studies’ Department of Community Relations. His most recent research projects include a study of the globalisation of the 20th century Ismaili community and the establishment, development and spread of the Ismaili jamatkhana in the 19th and early 20th centuries.

He is the author of Beyond the Mosque: Diverse Spaces of Muslim Worship (2019) and his articles have appeared in the Wall Street Journal and Huffington Post amongst other publications. 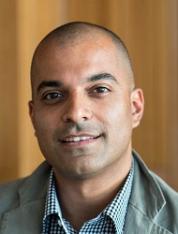