Shah Hussain currently holds the position of Collection Development Librarian at the Joint Library of the Institute of Ismaili Studies (IIS) and the Institute for the Study of Muslim Civilisations (ISMC). As part of his key roles, he is responsible for developing and promoting the library’s flagship collection – the Collection of Ismaili Printed Materials. As well as assisting in building the Shi’i and Quranic studies collections Shah also oversees the cataloguing projects and library services.

Prior to his current position, Shah has worked in many other capacities and undertaken many projects in the Library. In his role as Keeper of the Ismaili Special Collections, he conducted a comprehensive inventory of the collections, initiated and managed the library’s microfilming project and coordinated the cataloguing of the manuscripts.

From the co-location of the libraries of IIS and ISMC in 2010 to their formal merger in 2014 Shah has played a key role in merging the resources and services of the two libraries including managing the selection and implementation processes of the new library management system.

Prior to joining the IIS, he worked as a teacher within private sector education in Pakistan including Aga Khan

Education Services (AKES). In addition to serving as Secretary and then as President of the IIS Alumni Association, European Chapter Group, Shah has also served in various capacities within the organisational setup of the Ismaili community including as the Chair of ITREB Libraries, Chair of the Curriculum Committee and member of the One Community Panel.

Shah had obtained an MA in International Relations from the University of Peshawar, Pakistan prior to joining the Graduate Programme in Islamic Studies and Humanities at the Institute of Ismaili Studies in 2001. He went on to complete an MA in Social Anthropology at the School of Oriental and African Studies, University of London. After that Shah also obtained an MA in Library and Information Studies from the London Metropolitan University, London, United Kingdom. 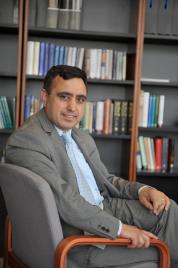