Sadiq S. Habib received his Bachelor of Arts, Honours in Anthropology in 2007 at Portugal’s Universidade Nova de Lisboa. He obtained a post-graduate interdisciplinary diploma in Migrations, Inter-Ethnicity and Transnationalism from the same school in 2011. After completing GPISH in 2014, Sadiq went on to do his MSc in Comparative Political Thought at the School of Oriental and African Studies. His master’s dissertation, titled Nietzsche in Alamūt—A Reading Exercise in Comparative Political Thought and Ismāʿīlī Studies, focused on bringing together those two  academic fields to offer a close reading of a passage found in Friedrich Nietzsche’s magnum opus, On The Genealogy of Morality (1887), where the German philosopher explicitly refers to the Ismailis of the Alamut

period (1090-1256 CE) as an example of his ethical, political, and philosophical thought.

In 2018, Sadiq was awarded the IIS Doctoral Scholarship to pursue a PhD in Religions and Philosophies at the School of Oriental and African Studies. His thesis, provisionally titled Identity Processes Among Emerging Adult Ismailis in Europe and North America—A Study in Integral Anthropology aims to analyse the identity processes of urban emerging adult Ismaili Muslims in the West, as a means to illuminate socio-historical developments among contemporary Ismaili communities. By focusing on what is still an under-researched area in Ismaili Studies, Sadiq S. Habib’s research aims to fill an important gap in the field. Moreover, through its insertion in the broader post-disciplinary project of the Anthropology of Identity Processes, it further aims to contribute to key aims of the IIS, namely the charting of innovative pathways, distinct both from traditional Muslim models of learning and 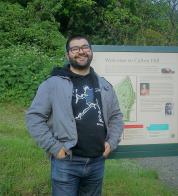