Taushif Kara received his Bachelor of Arts, Honours in International Development Studies in 2012 at McGill University in Montréal, Canada. After completing GPISH in 2016, Taushif went on to do his MPhil in World History at the University of Cambridge (Sidney Sussex College). His Master’s dissertation, titled 'And Guide us to the Abode of Peace: Islam and Khoja migration in colonial times,' traced the formation and consolidation of the Khoja diaspora across the Indian ocean through the late nineteenth and early twentieth centuries.

In 2017, Taushif was awarded the IIS Doctoral Scholarship to pursue a PhD in History at the University of Cambridge. His thesis, provisionally titled ‘Colonial Born?’: Migration, memory, and Islam for the Khoja of East Africa will further explore the modern history of the Khoja diaspora in the Indian ocean world, with an eye to incorporating often neglected oral histories into the record. 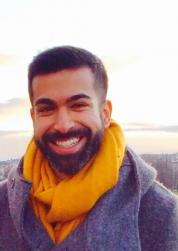