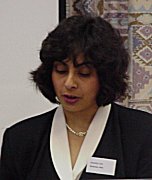 . Various Shi‘i dynasties and states proliferated in the Muslim world at that time. This ascendancy is, to some extent, a reflection of a fortuitous set of circumstances that enabled Shi‘i rulers to initiate their dominance in the peripheral lands of the Muslim world, such as the Idrisids

in Morocco and the Zaydi Imams in Yemen and the Caspian region or of rulers who were of Shi‘i background, such as the Buyids

, who established their power in Baghdad.

In contrast, the Fatimid state epitomised a distinctive instance of the establishment of a Shi‘i Ismaili state engendered by the da‘wa

that was centrally directed by the Imams over the course of a century and a half in Egypt, one of the core regions of the Muslim world. Their success represented an achievement of great stature not only for the Ismailis but also for the Shi‘a

. Henceforth, the Ismaili Fatimid Imam-Caliph took on the mantle of being the spiritual and temporal authority of Islam, in a manner similar to that of the ‘Abbasid Caliph who up to that time laid claim to be the sole legitimate authority in Islam. As such, the Fatimid Empire constituted Shi‘ism’s first sustained experience in authority and provided the most prominent example of the exercise of this authority and sustained leadership of a living Imam.

This paper seeks to examine the critical notion of legitimate authority in mediaeval Islam and how this was understood and manifested in tenth century Egypt during the reigns of the first two Fatimid Ismaili Imam-Caliphs, al-Mu‘izz li-Din

, the cornerstone of Shi‘ism, was officially articulated and considers the various facets in which the status and authority of the Imam were publicly expressed – through the literature that they produced, architecture, processions and ceremonials celebrating religious and traditional festivals, assumption of regal titles, minting of coins, dissemination of learning in Fatimid palaces and mosques, promotion of Fatimid rites and law, patronage of the Ka‘ba

This public demonstration of authority was of vital importance to the Fatimids for they asserted that they were the legitimate sovereigns of the vast, multi-religious and multi-ethnic populace of Egypt. Consequently, they sought to exhibit their rank and stature in a variety of forms and with a layer of meanings intended to speak, as it were, to the pluralism of communities.