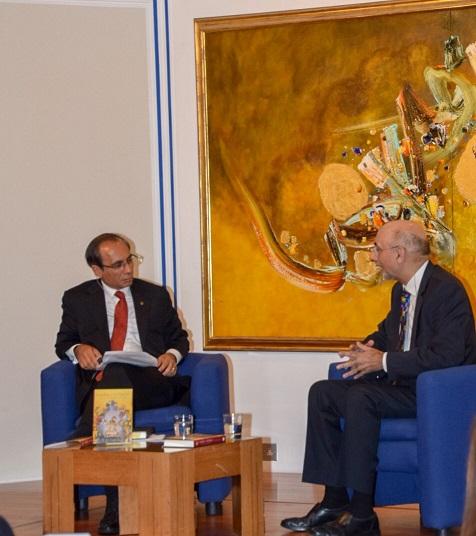 On 11 April, author Ali Lakhani gave audiences at the Ismaili Centre, London, fresh insights into his latest book Faith and Ethics: The Vision of the Ismaili Imamat

. He was joined by Mahmood Ahmed, Chairman of Aga Khan

Foundation UK, for an on-stage conversation where they explored the significance and correlation between faith and ethics.

In his introduction, Mahmood Ahmed spoke about the distinctiveness of the book, which does not approach the subject of faith from a theological perspective, but rather from a metaphysical perspective. He also commended the accessibility and relevance of the content, commenting:

TS Elliot, Sa‘di to Charles Dickens. There are many examples. That’s one of the strengths that Ali has. He is extremely well read. He reads intelligently and captures a lot of the wisdom of authors of the ages and that is reflected in this book.”

Faith and Ethics is one of the first books to provide an extensive survey of His Highness the Aga Khan’s aspirations, demonstrating how the values of Islam are at the forefront of all his work. The Aga Khan, the hereditary Imam

of the Ismaili Shi’a Muslims, has long maintained that one of the central elements of the Islamic faith is the inseparable nature of faith (din

), which are deeply intertwined. Humans are expected to integrate their outer conduct with their inner being. This means living in accordance with the ethical principles that promote integrity and human dignity. Speaking about the notion of living faith, Ali Lakhani remarked:

“The Imam talks of ethics as a bridge between din and dunya. It is how we bring our faith into the world. When we know that we are intimately connected with each other, and we live our lives in a way that expresses that - so we are now moving into the worldly realm and applying what we intimately know - we’re living truthful lives. If you’re true to yourself, you will be true to others.”

During the conversation, the speakers referred to verses from the Bani Adam’ by the Persian poet, Sa‘di (d. 1292), which sheds further light on the convergence between faith and ethics and is also cited as the epigraph to the book. The poem reads:

“The sons of Adam are limbs of each other,

Having been created of one essence.

When the calamity of time affects one limb

The other limbs cannot remain at rest.

If you have no sympathy for the troubles of others,

You are unworthy to called by the name of ‘a Human.”

This verse which is also inscribed at the entrance of the United Nations building in New York reminds us that we have all been created from a single soul and therefore we have a duty towards one another. Placing ourselves in another person’s situation, understanding their plight, feeling what the Other feels, is a fundamental aspect of being human and living our faith. In his book, Ali Lakhani, expresses this as:

“The capacity to empathise, to engage the Other with a sensibility that combines knowledge with feeling requires one to have the ability to understand the situation of the Other in a way that moves beyond mere comprehension to appreciation, to a participatory mode of understanding. It requires, as it were, the ability for one to place their mind in their heart.”

The evening discussion left the audience stimulated and engaged with many people staying behind after the formal event came to a close, to talk more about His Highness the Aga Khan’s vision for humanity and the long tradition of Muslim leadership in which this is rooted.

Future book launch events for Faith and Ethics are being planned for British Columbia and Toronto, Canada, for the summer of 2019.

To find out more about the book, visit the publications content page.