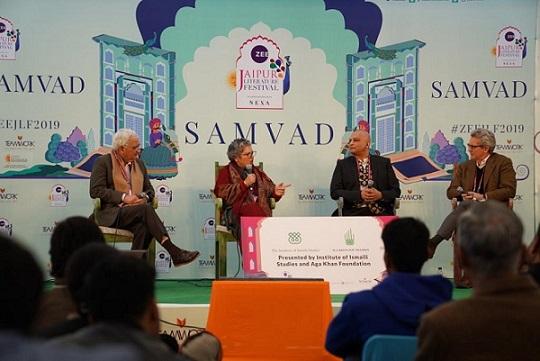 Many of us are curious about other cultures with a hunger for experiencing the “out of the ordinary”, and we satisfy this desire in different ways. For some this may involve physically travelling to other parts of the world, whilst for others it may involve turning to literature to transport our hearts and minds more figuratively.

The annual ZEE Jaipur Literature Festival is an event that unites our enthusiasm for travelling and consuming literary works at the same time. This lively five-day extravaganza of readings, debates and discussion enables the public to hear from some of the most highly regarded literary figures of our time, whilst bringing together intellectual minds from around the world in a lavish and extraordinary city steeped in a rich and colourful history.

On 27th January, The Institute of Ismaili Studies and the Aga Khan

Professor Hirji delved into the book, sharing highlights with a packed pavilion and discussing themes such as defining Islam, micro-histories, the role of women, Muslim dynasties and modern interpretations of Islam. Set against a backdrop of Rajasthan’s stunning cultural heritage the Diggi Palace in Jaipur – ­­Professor Hirji explored whether it is indeed possible to write the history of Islam through a single story, given its multiple and often competing narratives.

Speaking about a key feature of the book, Professor Hirji said:

“These type of micro histories are an increasingly important part of emerging scholarly study and their inclusion in this book is meant to signal new avenues of enquiry and challenge conventional frameworks and grand narratives that are often used to write about Islamic history.”

Responding to whether there is one or many Islams, Salman Khurshid said:

“The concept and basic belief is the same everywhere. But its understanding, interpretations, conceptions and presentations may be quite different.”

Illustrated with more than 250 spectacular images, Islam: An Illustrated Journey explores the rich pluralistic heritage of Islam in a clear and accessible way. The book takes readers on a visual journey from the advent of Islam up to the present day, and across the landscapes of the Middle East, the Mediterranean, South and Central Asia, the Indian Ocean, Africa, and Europe where Islam also took root and thrived. Islam: An Illustrated Journey features the accomplishments of Muslim writers, artists, architects, scientists, philosophers and theologians, and provides an account of Islam’s diverse communities including Sunnis

, Shias and Sufis, as well as the lives of many of the men and women who have contributed to Islamic civilisation through the centuries.

Hot on the heels of the Jaipur Literature Festival, Professor Zulfikar Hirji went on to discuss Islam: An Illustrated Journey at two launch events in Mumbai. These will be followed by future events in North America and Europe.