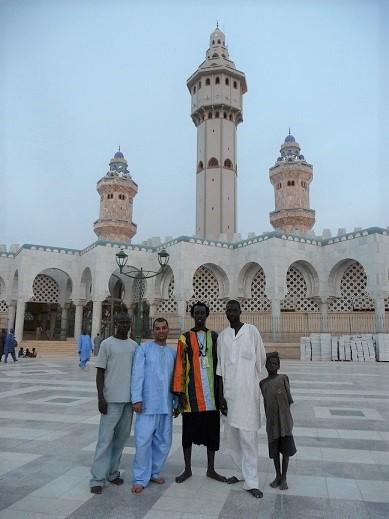 The second publication in the Institute’s new World of Islam series, Beyond the Mosque: Diverse Spaces of Muslim Worship, is a first person exploration of sacred spaces across the breadth of the Muslim world. The author, Rizwan Mawani, describes how his interactions with both well-known spaces of worship as well as those off-the-beaten-track have religious significance for their Muslim communities, from countries ranging from Senegal to China.

Part travelogue and part anthropological study, this book will appeal to readers interested in lived Islam and Muslim cultures, in travel and architecture, as well as those with an appreciation of the diversity of religious space and practice. In many people’s imagination, the mosque has become synonymous as the site of Muslim piety, just as the church is synonymous with Christianity and the synagogue with Judaism. Mawani, notes:

“Once upon a time, when people thought of Islam, its religious practice, their minds automatically associated Muslim spaces with domes and minarets. Now, architecture, like religious acts, provide avenues in which Muslim communities can give form to their values and beliefs, allowing them to express and articulate them through the spaces they build and use.”

This book broadens the Muslim religious landscape by re-inserting diverse spaces of Muslim worship such as the husayniyya, jamatkhana, khanaqah, and zawiya, among others, into our spectrum of Muslim religious spaces. Mawani introduces us to a variety of spaces, modest and elaborate: their distinct structures, the rituals practised within them, and the purposes they serve as community centres and markers of identity.

The book begins by exploring the mosque’s early history, its use and evolution during Islam’s formative years, moving on to regional and contemporary mosques and their architecture. The author extends his journey and shares his insights into Shi‘i sites of practice and explores spaces used by mystically-inclined and Sufi groups, as well as those who choose to define themselves outside the boundaries of Shi‘i and Sunni Islam. By using space as his entry point, readers are given a window into lesser known places of worship across several countries from Iran and Pakistan to Lebanon and Turkey, as well as contemporary examples from Muslim communities in Europe and North America.

The book highlights the diverse and shared ideals within Muslim communities across borders and buildings and helps readers to reflect on whether spaces of worship and ritual practices can be labelled as representative of Islam, or whether we should be considering a multiplicity of practices that speak to Islam’s regional cultures, gender, geography and traditions.

Beyond the Mosque, is an easy and engaging read with colourful photographs showcasing the plurality of Islam’s living traditions. Commenting on the accessibility of the book, Professor Robert Hillenbrand from St Andrews and Edinburgh Universities remarked:

“This book offers a compelling insight into Muslims’ worship in different kinds of buildings around the world. The author introduces readers to the basic historical, religious and architectural backgrounds, enlivened with eye-opening illustrations. Drawing upon vast first-hand experiences, he outlines in fluent, accessible prose the wonderful variety of sacred rituals and spaces that Islam espouses.”

The ethos of the World of Islam series is to help readers better understand and appreciate the multiple facets and subtle nuances of Islam, as a living faith with many diverse communities of interpretation and traditions, and Islam as a civilisation and of Muslim cultures. The more we understand the beliefs and customs of our global neighbours, as well as our collective past, the greater our chances are of living together harmoniously.

Discussing the ethos of the series, the General Editor, Dr Shainool Jiwa, commented:

“Through this series, we hope to engage and inspire general readership with informed narratives on diverse facets of Muslim life – their history and heritage, culture and beliefs, art, architecture and literature, to link the past and present, and develop an appreciation for the cosmopolitan world of Islam.”

Aimed at general readers, Beyond the Mosque: Diverse Spaces of Muslim Worship is available in paperback, e-book and audio book formats. To learn more about this book, visit the publications page. The next book in the series on Prophet Muhammad and prophecy, will be published in 2020.