A prominent Ismaili scholar of the 20th century, Dr Zahid Ali passed away in 1958, leaving behind a small number of widely acclaimed studies on the history and doctrines of the Ismailis. Nearly forty years later, in the autumn of 1997, the only surviving son of Dr Zahid Ali, Professor Abid Ali, generously donated to The Institute of Ismaili Studies an exceptional collection of Arabic manuscripts inherited from his father's collection.

A selection of manuscripts is showcased below. 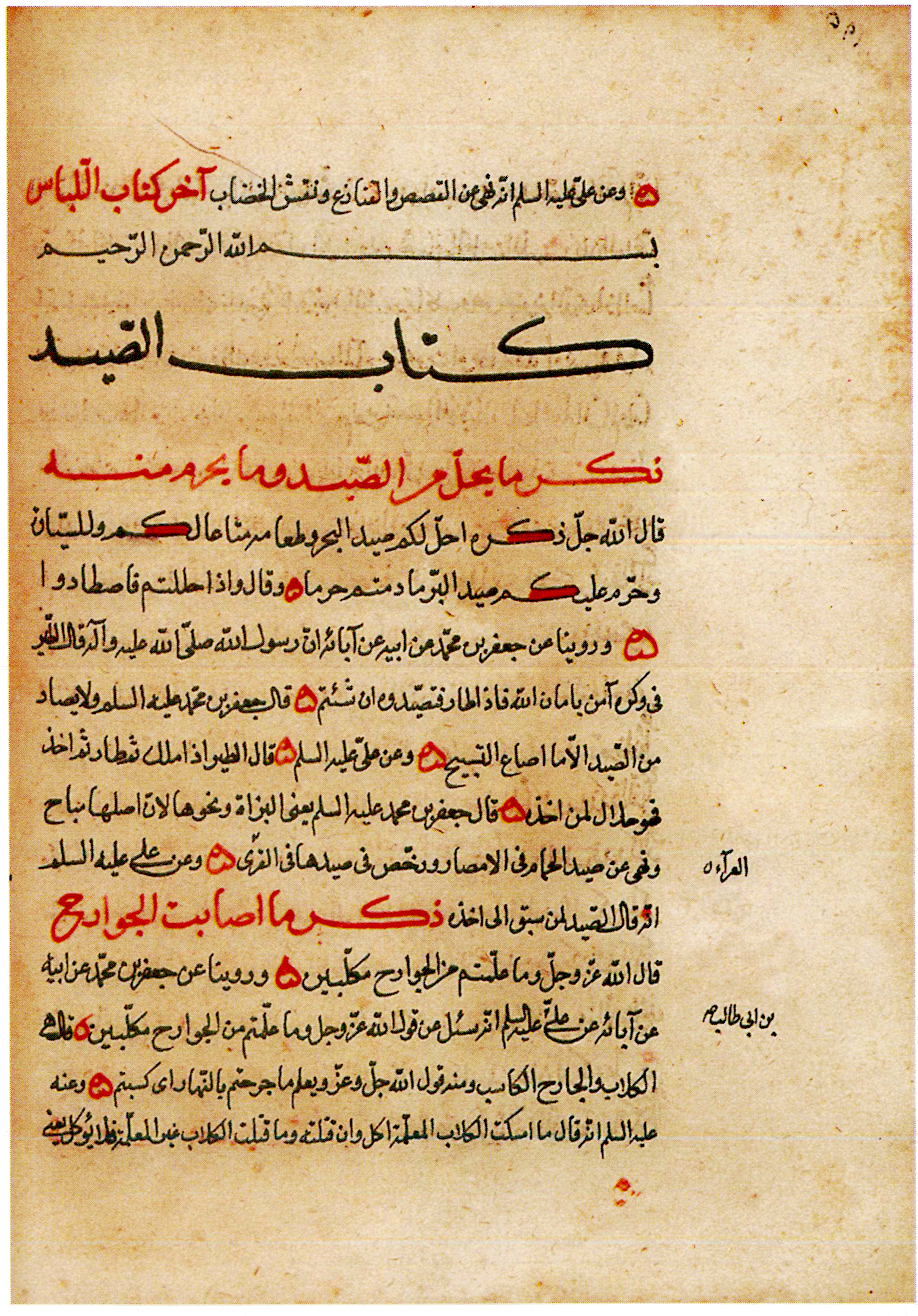 The Daʿaʾ’im, in two volumes, can be arguably described as the most important work on Ismaili law. It was commissioned by the Fatimid Imam

al-Muʿizz and written in North Africa around 349/960. Its purpose was to serve as the religious and civil code from the Fatimid religious and secular administration. However, its value as an authoritative and respected historical legal source has lasted to the present day. This is reflected in the fact that the Daʿaʾim has been the main reference for generations of Ismaili scholars in the legal field. The first volume deals with acts of obedience to God (ʿibadat). The second volume focuses on codes of conduct and regulations for the community (muʿamalat).

312 leaves (plus 3 leaves of miscellaneous annotations); 18 lines per page; 183 x 135 mm; clear small black naskhi script; headings in red; occasional corrections, additions and annotations in the margins, sometimes in a later hand; purple leather binding with diced ornaments on both covers, with flap. 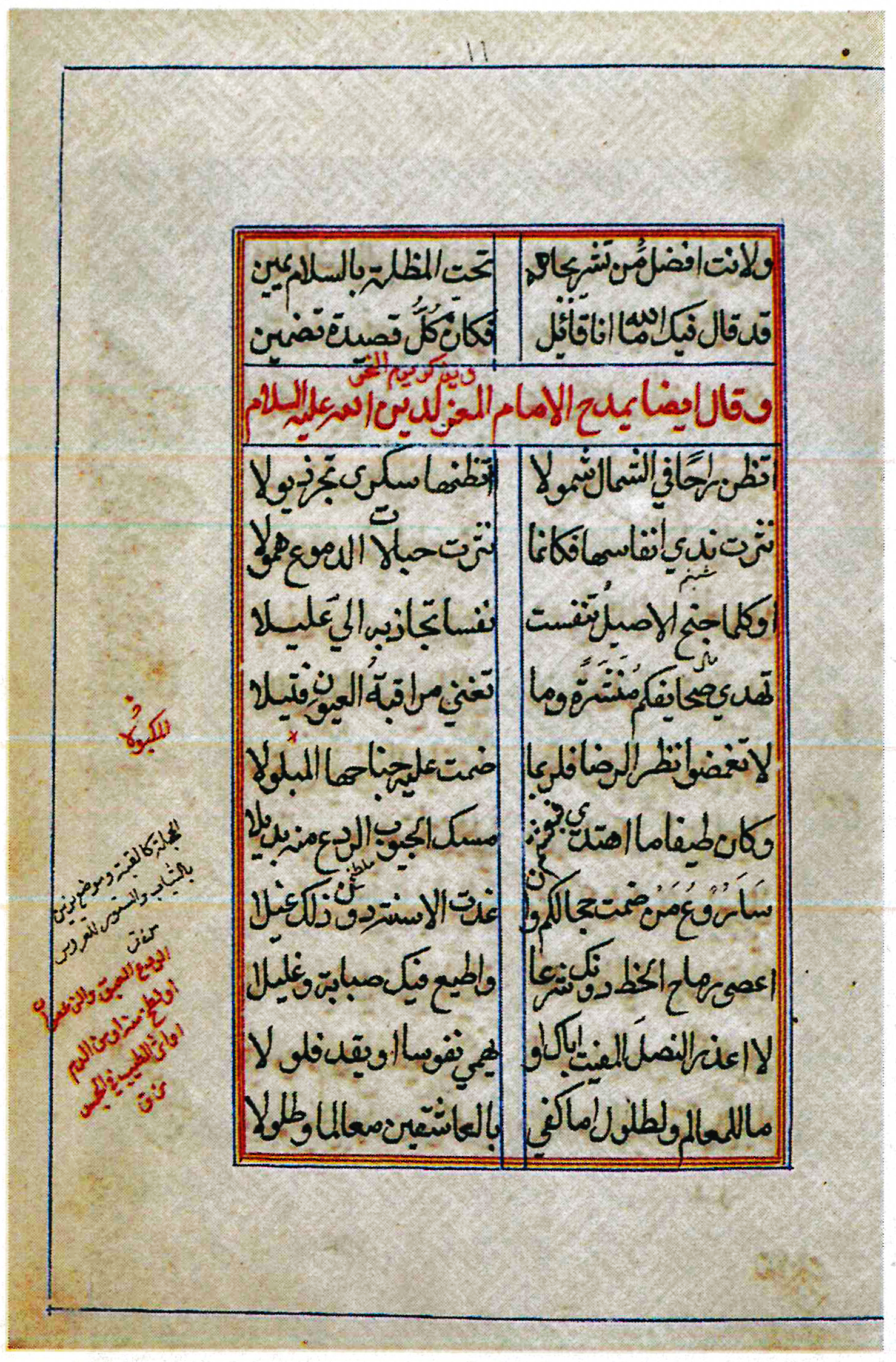 Ibn Haniʾs collection of poems in praise of the Fatimids

. Beside providing biographical information on the author, the poems cover religious topics, such as the imamat

and its validity. They also deal with issues of a political nature and address polemics against the Fatimids by their Ummayad, ʿAbbasid and Byzantine

rivals. The poems were composed over a long period of time. The earliest goes back to 347-8/958-9, written in honour of the general Jawhar, who was to mastermind the conquest of Egypt on behalf of the Imam-caliph al-Muʿizz. Most of the poems are dedicated to the Imam-caliph al-Muʿizz himself as well as to Jaʿfar b. ʿAli al-Andalusi and his family. Jaʿfar had been brought up at the court of al-Mahdiyya and was the Imam-caliph’s foster-brother.

Copied in the first quarter of the 14th/20th century); copyist unknown. 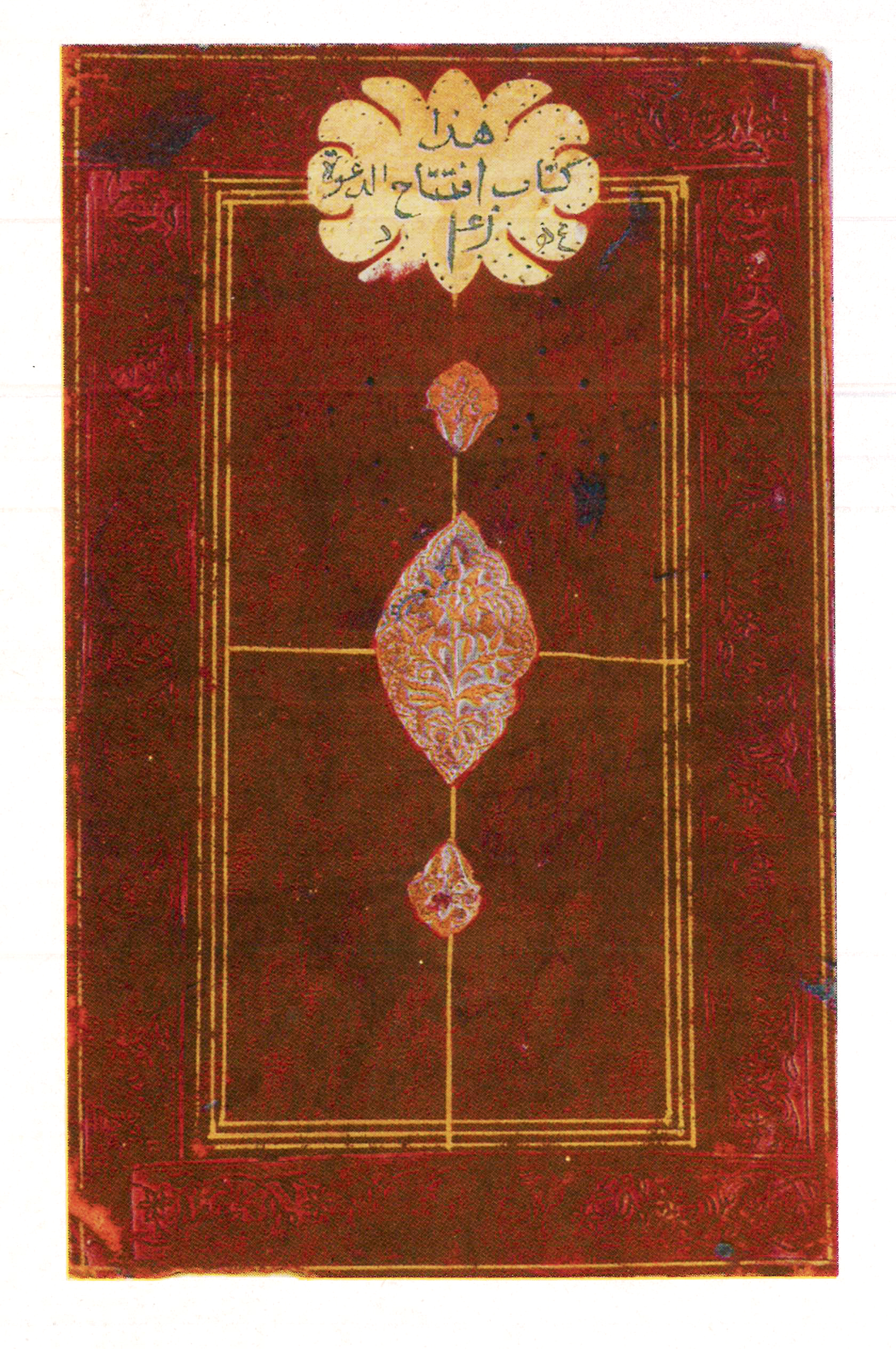 Arguably the most authoritative Ismaili historical work on the early daʿwa until the time of the establishment of the Fatimids in North Africa.

Copied in the second half of the 13th/19th century; copyist unknown.

141 leaves; 15 to 16 lines per page; 205 x 135 mm; black uneven naskhi script; title, headings and punctuation in red; corrections, additions and annotations in the margins; worm-eaten throughout with slight loss of text; purple leather binding with blind-stamped medallions and frames on both covers, with (detached) flap. 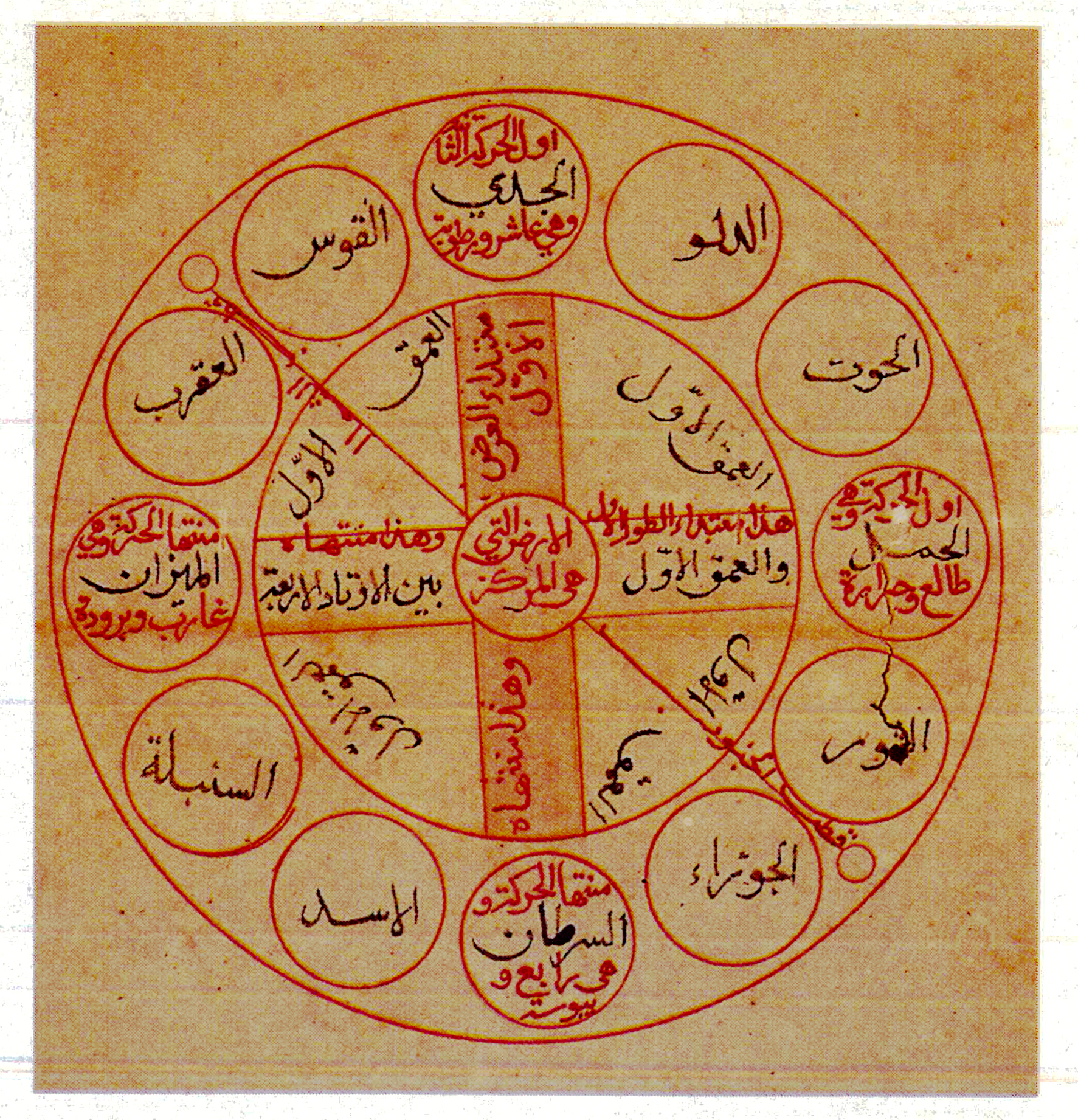 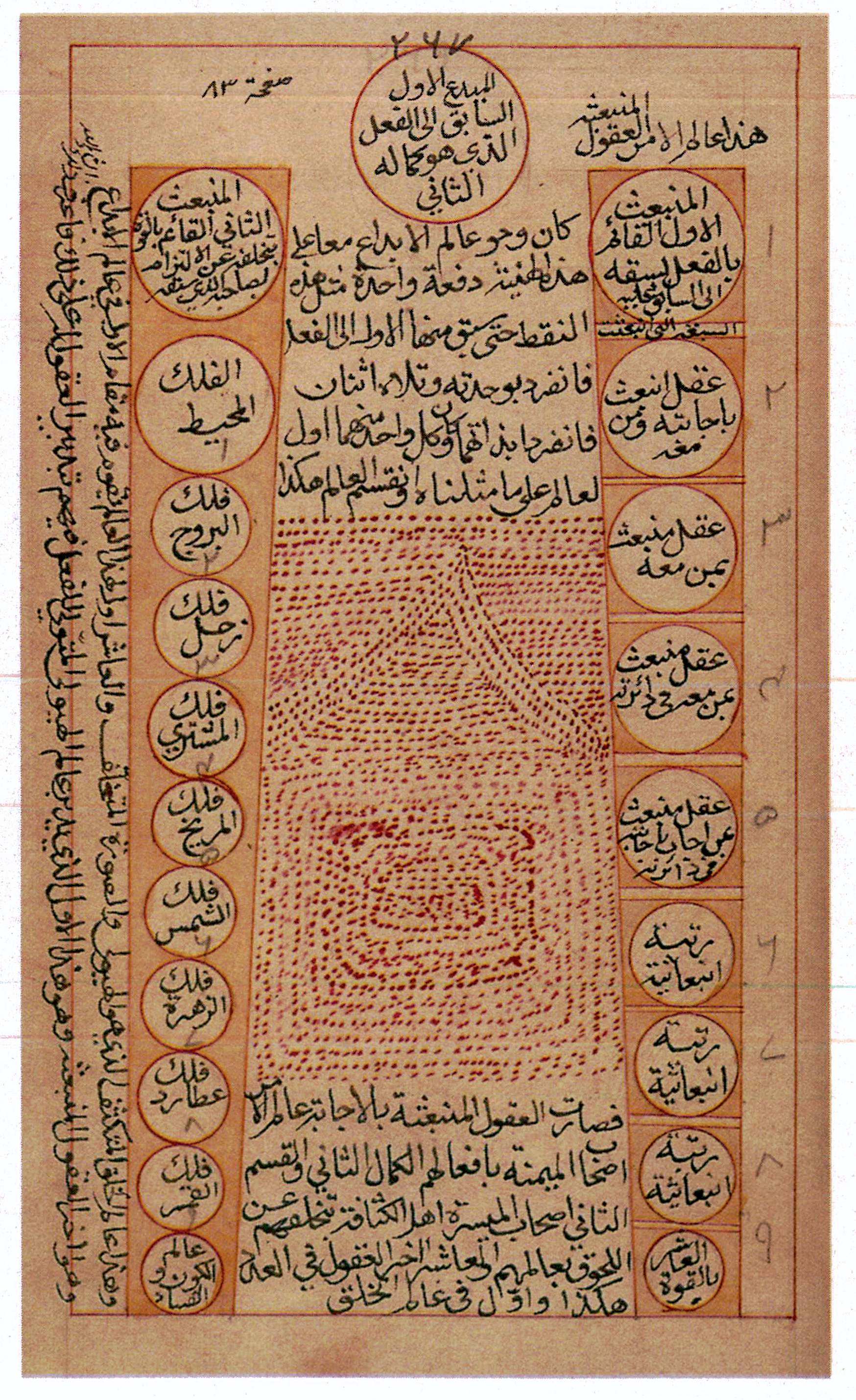 One of the best known Ismaili theological works belonging to the Yemeni Tayyibi tradition, in 14 chapters. Themes include cosmology, eschatology, religious and metaphysical hierarchies. One of the earliest known works to refer to the Rasaʾil of the Ikhwan al-Safaʾ, the Kanz al-walad is also based on the works of famous Ismaili authors of the Fatimid period such as Hamid al-Din 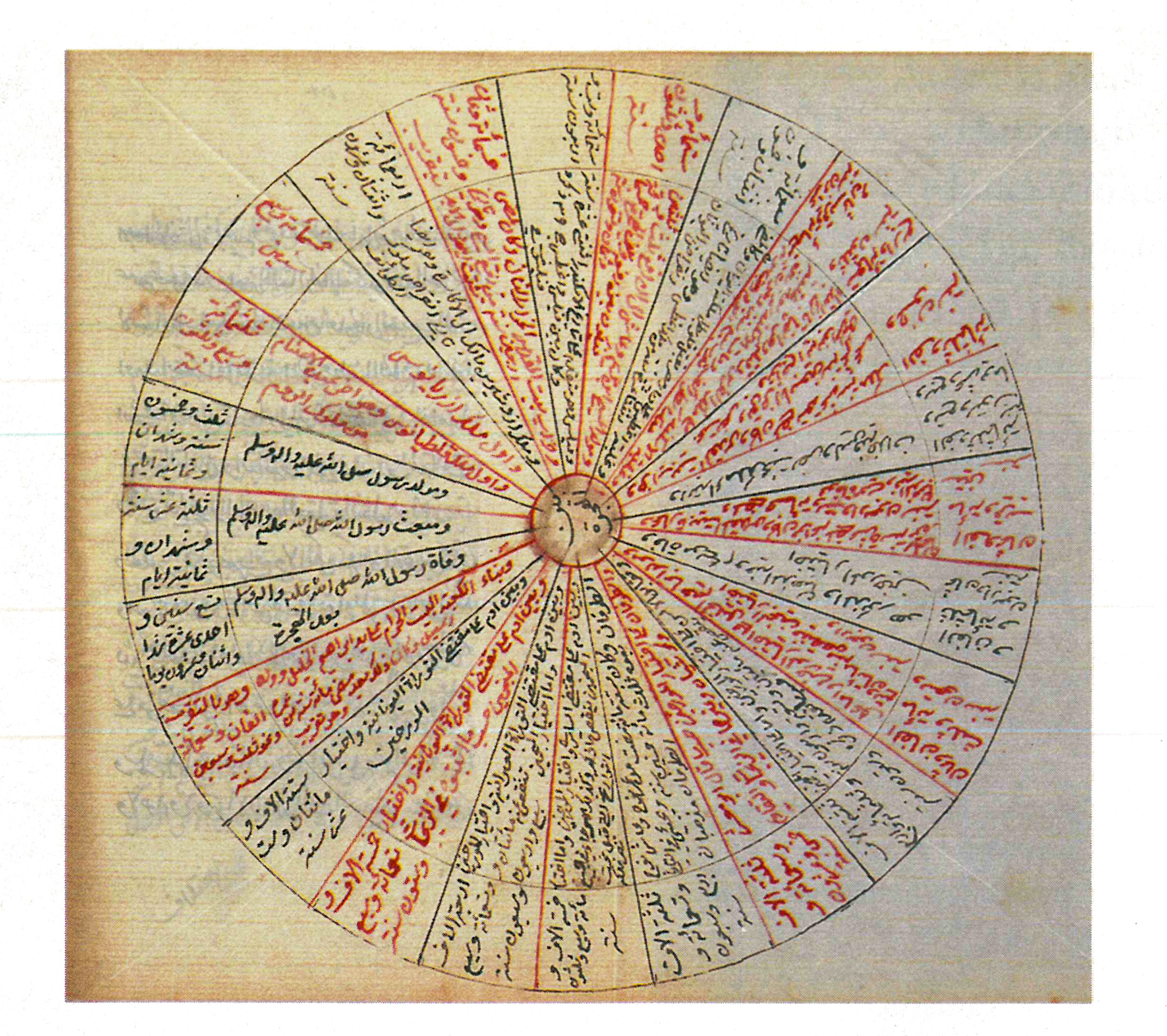 The famous seven-volume anthology of Ismaili literature, compiled by the author between 931/1524 and 933/1526. One of the valuable works preserved in the collection is Kitab al-Munazarat, by Ibn al-Haytham, an early Fatimid text which al-Bharuchi copied in the sixth volume but unfortunately not part of this set.

The first volume deals with prophethood, imamat and the organisation of the daʿwa. The author provides the reader with a full list of all the literature he has consulted and offers insight into his years of learning under the tutelage of the 21st Yemeni Tayyibi daʿi Husayn b. Idris. 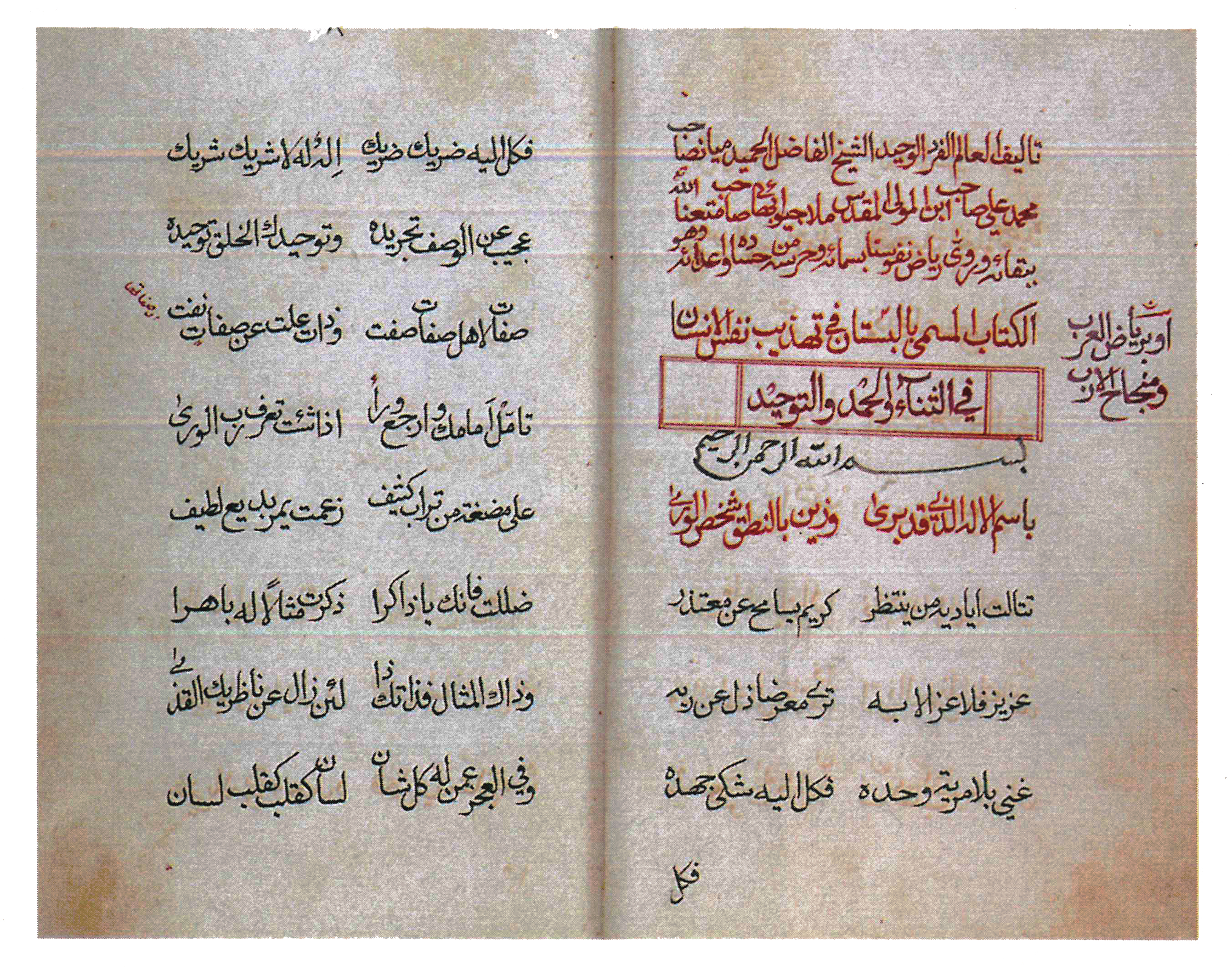 A possibly unique copy of this important collection of 2,796 verses covering a variety of philosophical subjects as well as doctrinal and ethical issues. The volume is divided into 50 chapters, each including a hikaya in rhyme.

Copied in 1302/1884 by ʿAli Muhammad b. Mulla Hasanji. Written during the time spent at the service of the author. 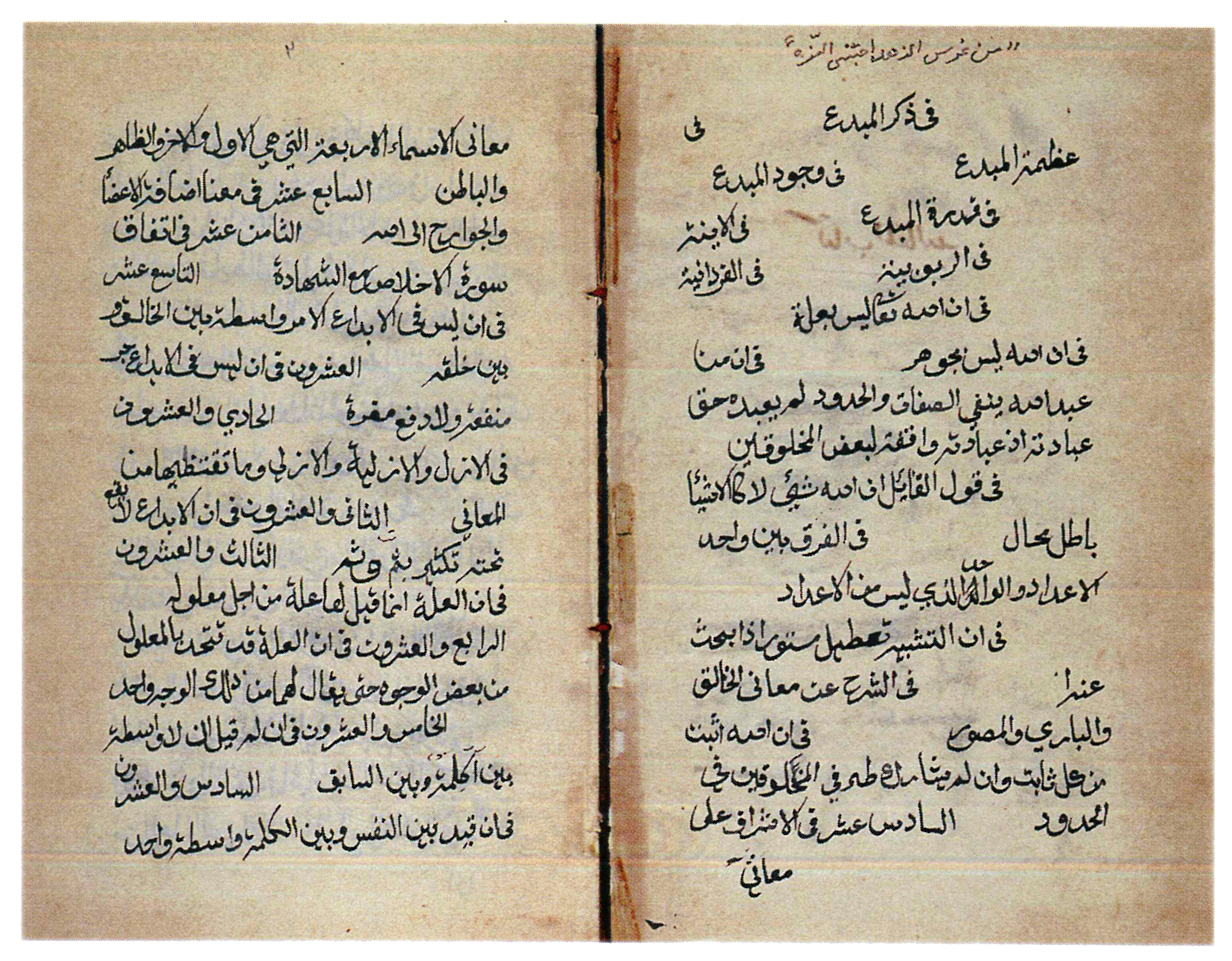 The second known extant copy of this major philosophical treatise by one of the most influential early Ismaili thinkers. Possibly the largest amongst al-Sijistani’s works and like most of his others exhibits an interface between Muslim culture and Neoplatonism. According to Hamid al-Din al-Kirmani (d. after 411/1020), the composition of al-Maqalid follows chronologically that of Kitab al-Nusra which al-Sijistani wrote in support of Muhammad b. Ahmad al-Nasafi (d. 332/934-35). The work is divided into seventy iqlids and centres around cosmology. In particular, it elaborates on the Word (kalima

) or Command (amr) as intermediary between the Originator (mubdi‘) and the Intellect (ʿaql). 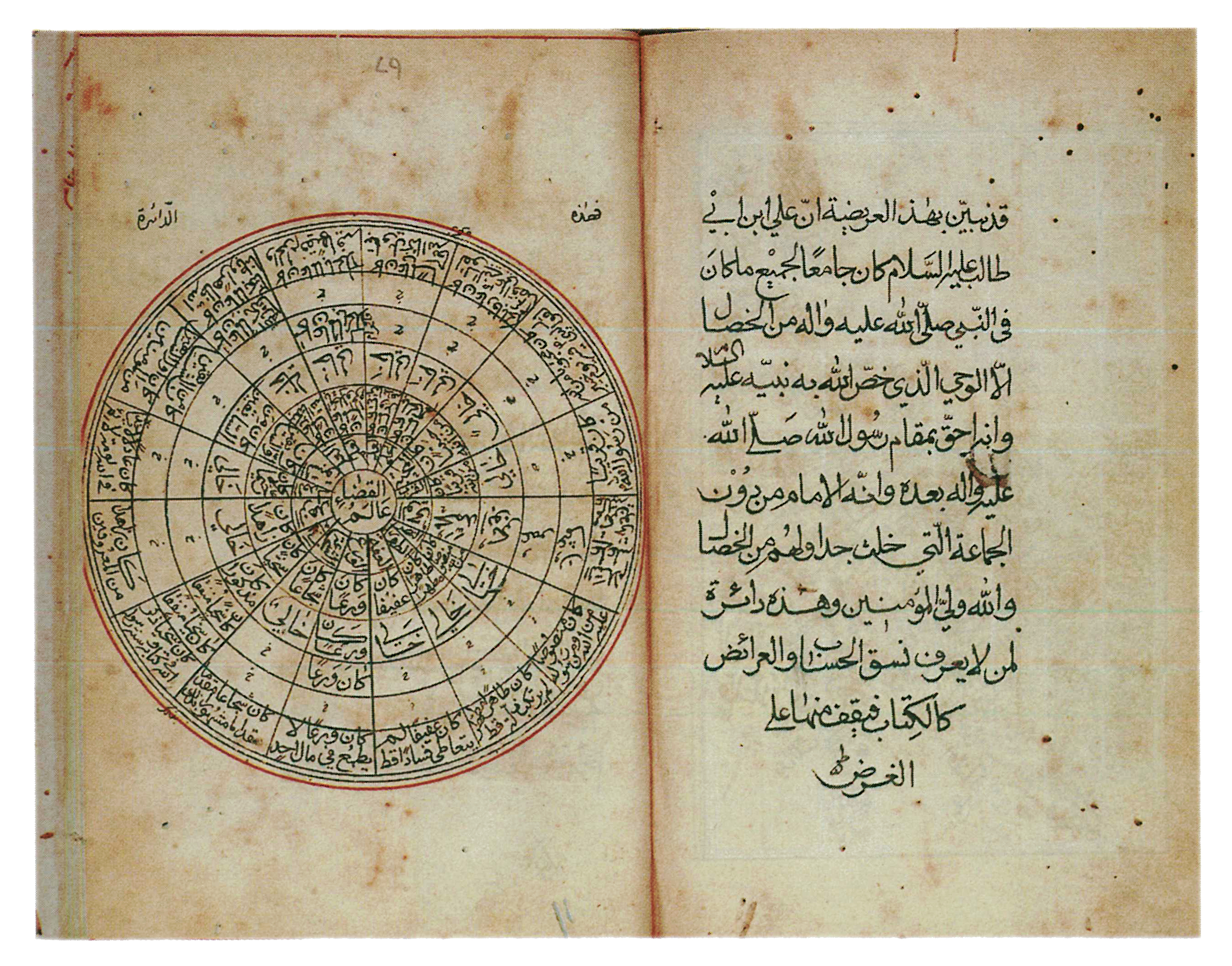 This treatise, consisting of two main parts (maqalas) arranged into masabih, subdivided into barahin, was written around 404/1013 as part of an effort to convert the Buyid vizier

of Iraq, Fakhr al-Mulk (d. 407/1016) to Ismailism. The first part of the work deals with theology, the soul, eschatology, taʾwil and prophethood. The second part focuses on matters relating to the imamat, that is, its validity, the necessity for its existence, the infallibility of the imam, etc. The work ends with philosophical and genealogical argumentations ultimately aiming at defending the right of al-Hakim to the imamat. The seventh burhan in the fifth misbah of the second maqala contains quotations from Hebrew and Syriac in Arabic script.

Copied during the lifetime of Abut Muhammad Najm al-Din, mentioned in the colophon, by ʿAbd al-ʿAli b. Fath ʿAli of Awrangabad. 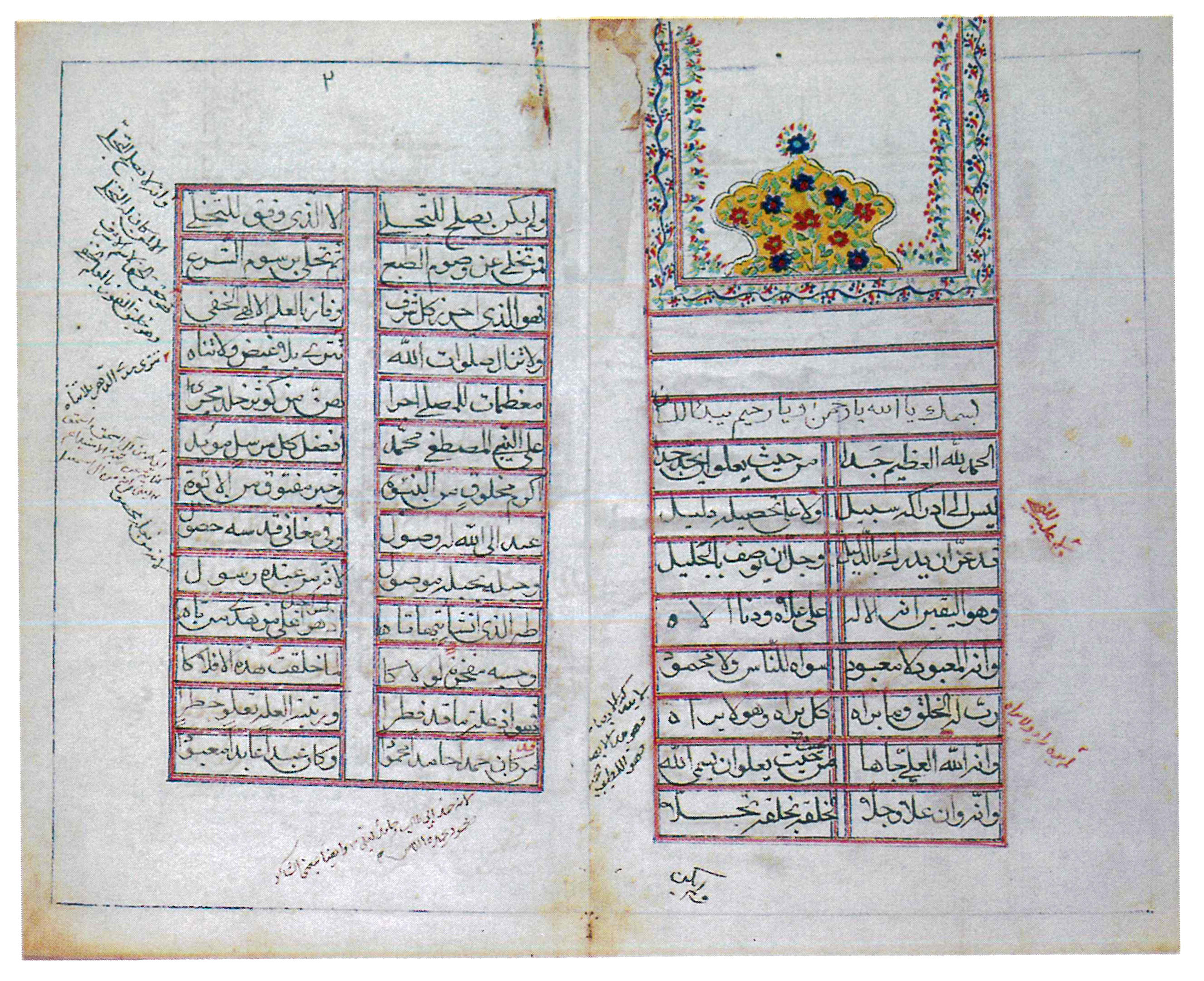 A collection of poems dealing with several doctrinal aspects such as the Unity of God, cosmic emanations, the material world, angelology, imamat, cycles of revelation and concealment, the hereafter, etc.

One flyleaf, 110 leaves, plus one attached folded leaf with a diagram; 13 couplets per page; 200 x 130 mm; clear black naskhi on blue paper, within red and blue double frame; decorative headpiece on the opening page; headings and quotations in red; corrections, additions and annotations in the margins. 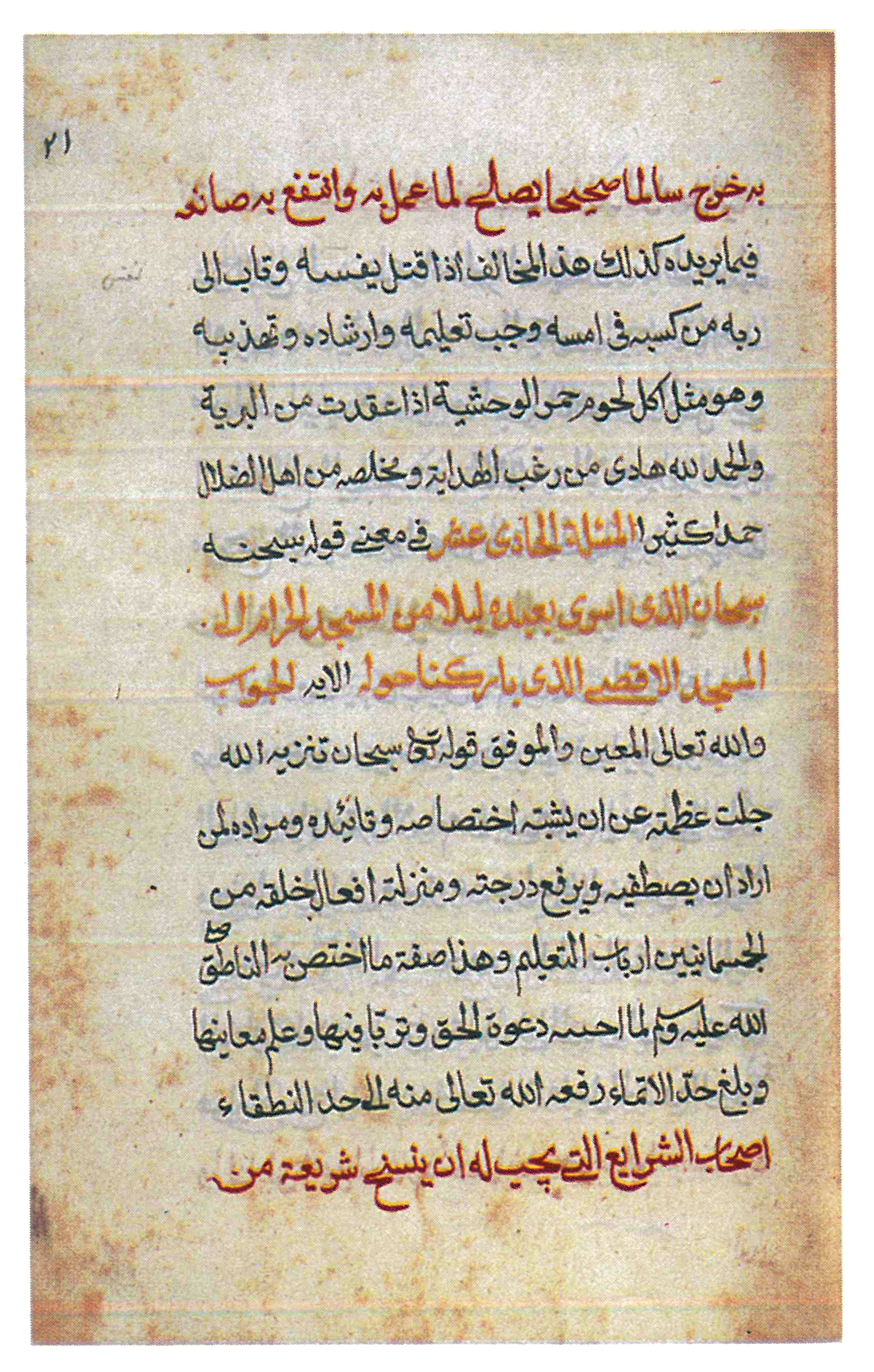 Seventy questions and answers dealing mainly with allegorical interpretations of Qurʾanic verses and Traditions of the Prophet, as well as covering, in no particular order, a variety of themes like the imamat of Zayn al-ʿAbidin and Jaʿfar al-Sadiq, tawhid

, prayer, the prohibition of drinking wine, the creation of physical and spiritual worlds and the hereafter.

Copied in 1267/1851 by the 47th Daʿudi daʿi mutlaq Abu Muhammad [ʿAbd al-Qadir] Najm al-Din b. Tayyib Zayn al-Din, according to a note pasted at the end of the manuscript.

One flyleaf of annotations, 144 leaves; 15 lines per page; 210 x 135 mm; elegant black naskhi; lines in red, green and yellow throughout the first 24 leaves, headings and marks in red throughout the rest; slightly water-stained towards the end. 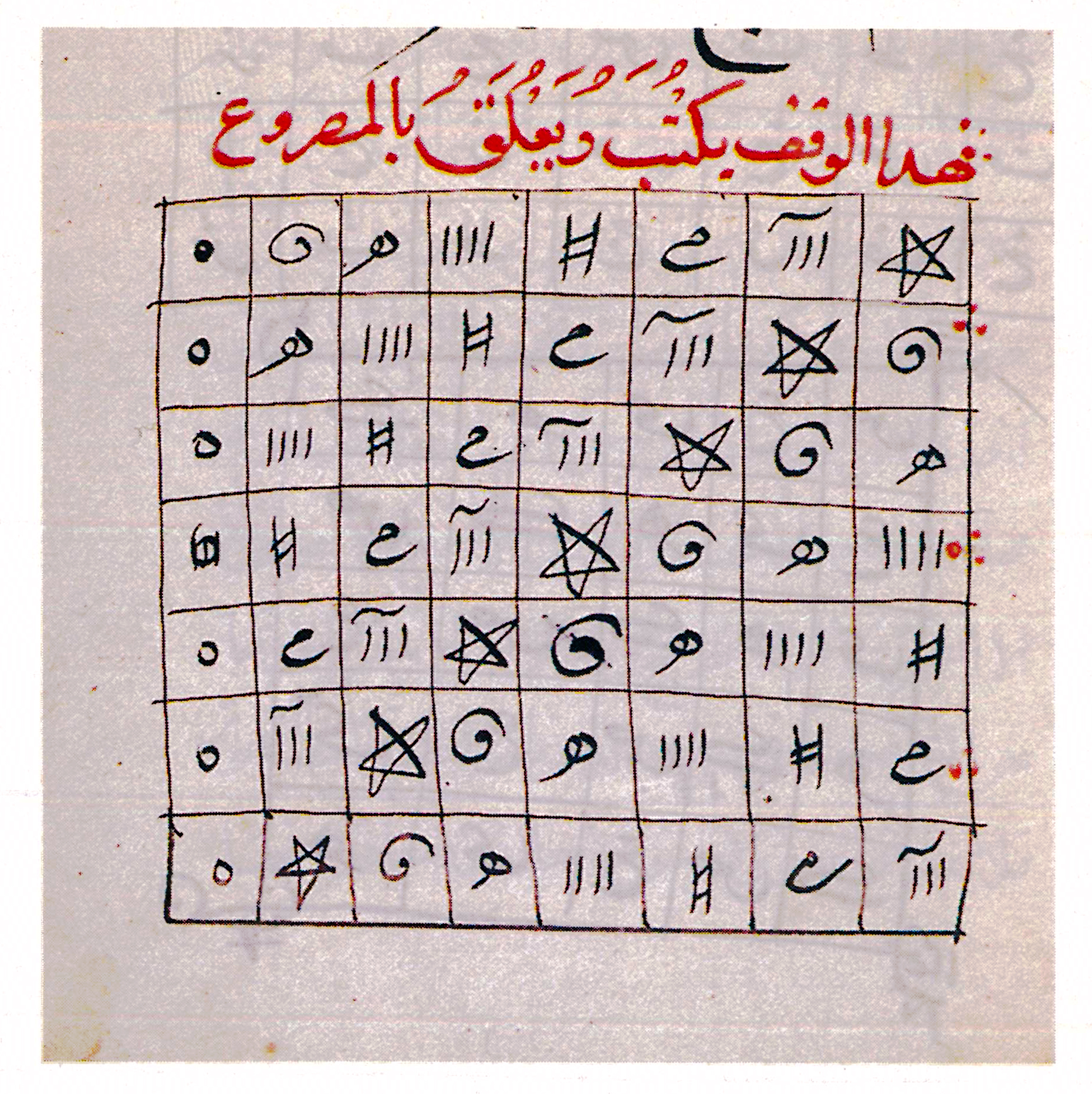 A devotional poem with symbolic diagrams at the end (ff. 1r-16v). It is followed by a short commentary and explanation of the symbols and verses (ff. 17r-23r).

Copied in the first half of the 14th/20th century; copyist unknown. 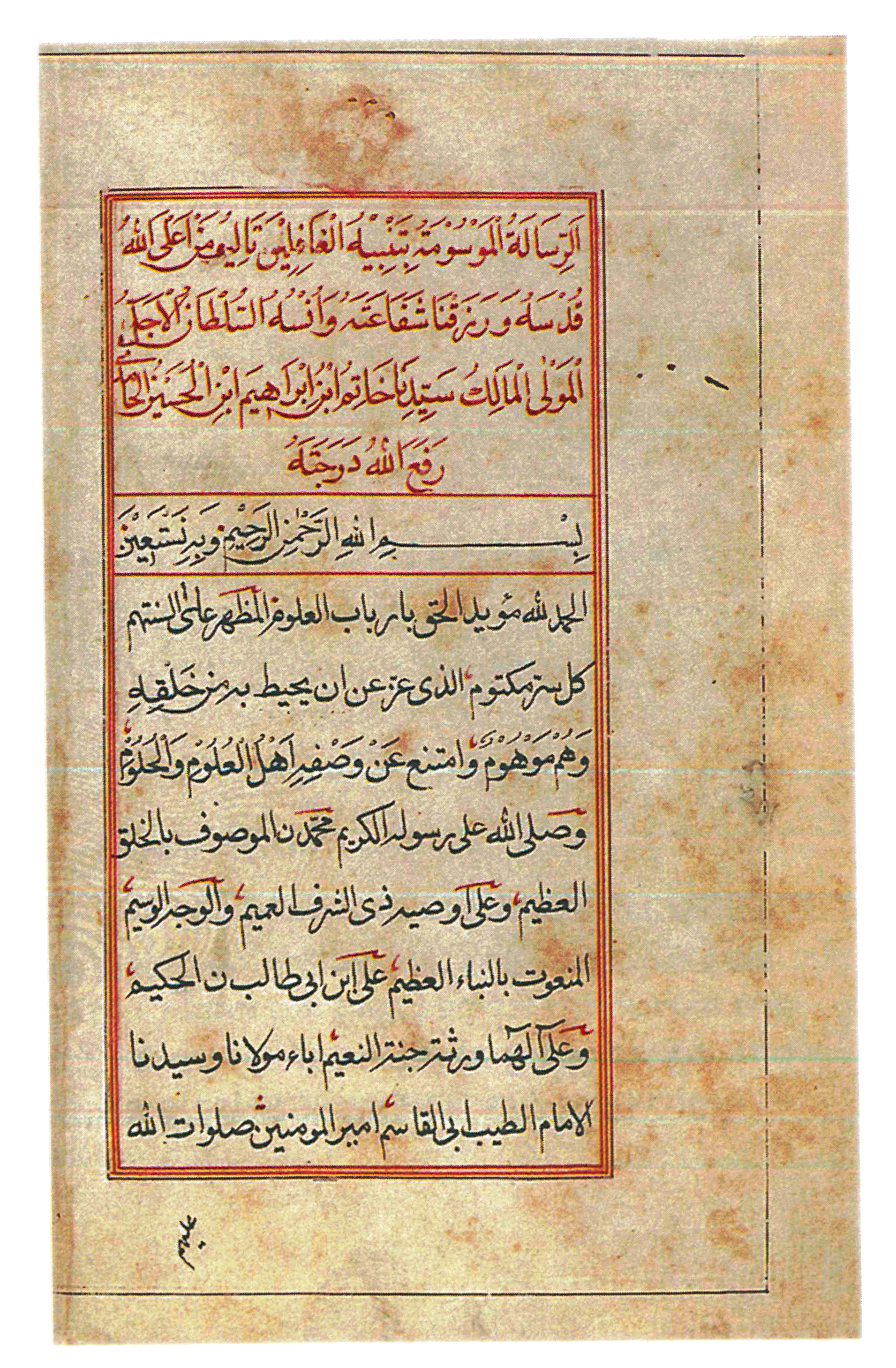 A short work on ethics and conduct, based on the teachings of the Rasaʾil of the Ikhwan al-Safaʾ and the sermons of the Fatimid Imam-caliph al-ʿAziz (d. 386/996).

104 leaves; 13 lines per page; 213 x 140 mm; elegant black naskhi within blue and red double frame; title, headings, words and some overlining in red or purple; a few corrections and additions in the margins. Part of the colophon in Persian. 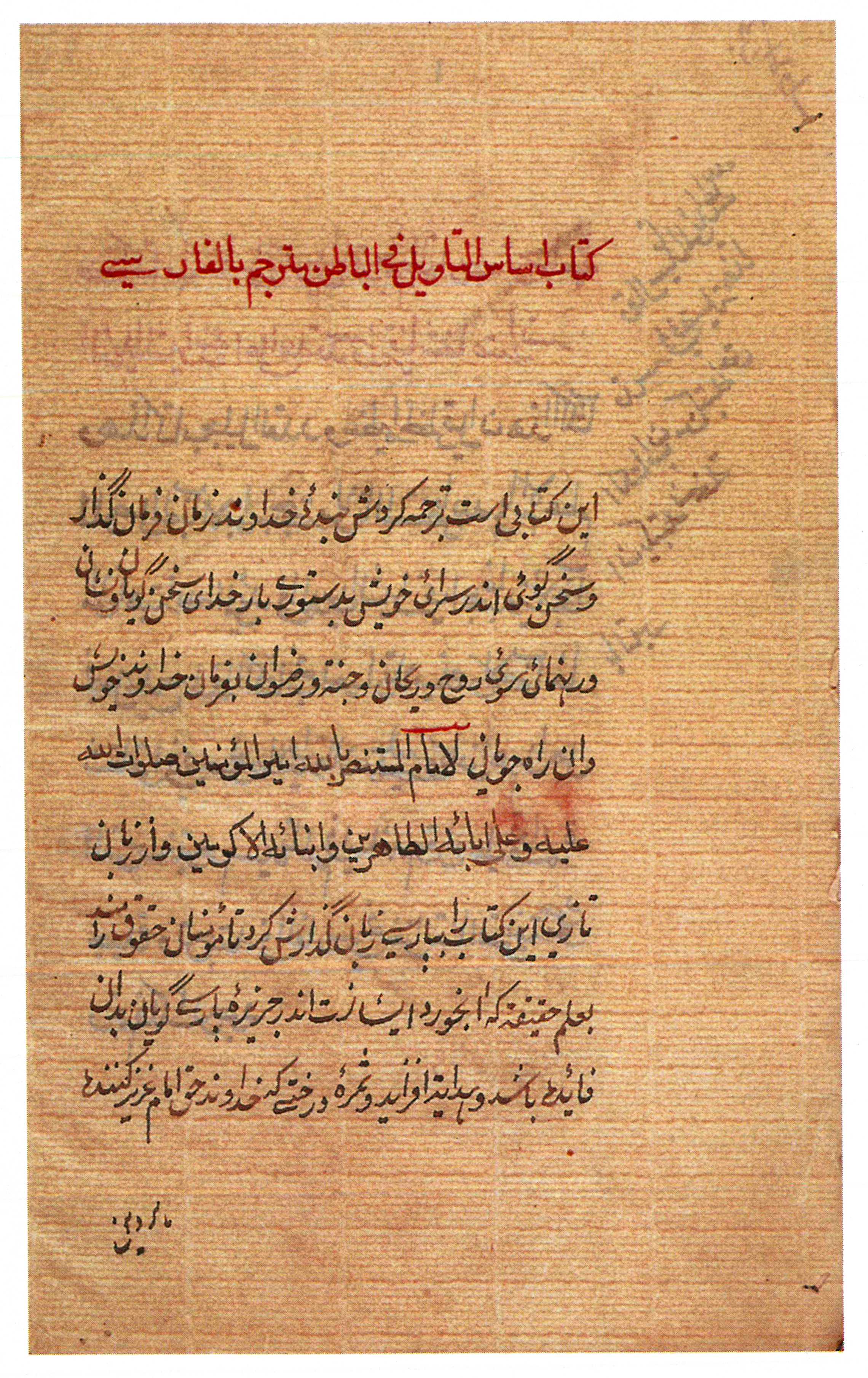 The Persian translation of Asas

ʿAbd al-Mahdi b. Mulla ʿAbd al-ʿAli, at the time of ʿAbd al-Qadir Najm al-Din, mentioned in the colophon.