Memoirs of the First Aga Khan

Who was the first Aga Khan? Learn about the life of Hasan Ali Shah, the 46th Imam of the Nizari Ismailis and the first Ismaili Imam to bear the title of Aga Khan, from his memoirs Ibrat Afza.

The First Aga Khan - Memoirs of the 46th Ismaili Imam offers a new Persian edition and the first English translation of the Ibrat-afza, the memoirs of Aga Khan

I. The Ibrat-afza was composed in the year 1851, following the Imam

’s departure from Persia and his permanent settlement in India. 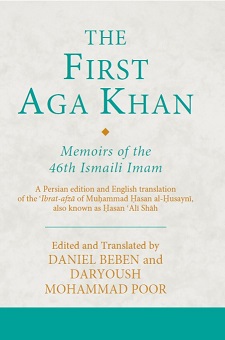 The text recounts the Aga Khan’s early life and political career as the governor of the province of Kirman in Iran, and narrates the dramatic events of his conflict with the Qajar establishment in Iran and his subsequent travels and exploits in Afghanistan and British India. The Ibrat-afza provides a rare example of an autobiographical account from an Ismaili Imam and a first-hand account giving a window into the history of the Ismailis of Iran, India and Central Asia at the dawn of the modern era of their history. Consequently, the book will be of great interest to both researchers and general readers interested in Ismaili history and in the history of the Islamic world in the nineteenth century.