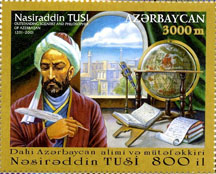 al-Tusi was born in February 1201 and died in Baghdad in June 1274. His lifetime witnessed the existence of such luminaries as Roger Bacon, Ibn ‘Arabi, Moses Maimonides, Thomas Aquinas, Ibn Taymiyya, Gregory Chioniades and Levi ben Gerson. Tusi acquired the honorific title of Khwaja (distinguished scholar and teacher) in his lifetime. After his death, his influence continued in fields as diverse as ethics, philosophy, mathematics, logic and astronomy, and he came to be referred to as ustadh al-bashar (teacher of mankind) and al-mu‘allim al-thalith (the third teacher, that is, after Aristotle and al-Farabi).
As a young boy, Nasir al-Din was encouraged by his father to study all “the branches of knowledge and to listen to the opinions of the followers of various sects and doctrines”; as such, Tusi travelled widely to study with teachers of his choice. His studies completed, Tusi found patronage with the Ismaili rulers of Alamut

Among these are the Akhlaq-i Nasiri, the Risalah-i Mu‘iniyya and its sequel the Hall-i Mushkilat-i Mu‘iniyya in which one finds Nasir al-Din’s new models for the moon and planets, and the logical work Asas

al-iqtibas. Furthermore, he worked on the commentary to Ibn Sina’s Al-Isharat wa-’l-tanbihat during these years.” Ragep continues: “... after going to Alamut (ca. 643 or 644 AH / 1245, 1246 or 1247 CE), Tusi seems to have devoted himself in large measure to working on his recensions of Greek and early Muslim scientific works. Many of the editions of the so-called ‘Middle Books’, in addition to his editions of the Almagest and Elements, date from this period.” [Source: F. J. Ragep, Nasir al-Din al-Tusi’s Memoir on Astronomy (al-Tadhkira

al-hay’a), vol. 1 (New York, 1993), page 21.]
With the fall of Alamut in 1256 CE, Tusi became an advisor to the Mongol ruler Hulegu and was later made a wazir and placed in charge of waqf (religious endowments). Among the major events of Tusi’s sojourn with the Mongols was the building of an observatory in Azerbaijan at Maragha under his direction, where the most renowned scientists of the time, including astronomers from China, participated in research and scientific observations. In 1274 CE, Tusi left Maragha with a group of his students for Baghdad, where he died in the same year.
Nasir al-Din al-Tusi’s contribution to the post-13th century intellectual history of Islam is monumental, and many of his works became the standard in a variety of disciplines up to modern times. Among his works on astronomy is al-Tadhkira fi ‘ilm al-hay’a (‘Memoir on the Science of Astronomy’), in which Tusi attempts to give a coherent and unified account of astronomy that would be useful both for students of the subject as well as non-specialists. The Tadhkira is modeled after one of Tusi’s Persian works, the Risalah-i Mu‘iniyya, which he wrote during the early period of his residence at the Ismaili stronghold in Quhistan.
The Memoir had an enormous influence on the subsequent history of astronomy; the significant number of extant manuscript copies of this text as well as the large number of commentaries written on the Tadhkira are silent testimony to this. At least fourteen commentaries and super-commentaries are known. Some of these commentaries discuss matters that are barely touched upon by Tusi, making them highly original works offering new solutions to topics such as the relation of theory and observation, and the role of physics in astronomy. One such commentary is that of ‘Abd al-‘Ali b. Muhammad b. Husayn al-Birjandi, entitled Sharh al-Tadhkira, which was completed in 1507-08 CE. A manuscript, dated 1673-74 CE, of al-Birjandi’s commentary is in the collection of The Institute of Ismaili Studies.

The influence of Tusi’s astronomical works was also felt in cultures beyond the borders of Islam. His Arabic recensions of Ptolemy’s Almagest and Euclid’s Elements were translated into Sanskrit in the 1720s and 1730s. Of even greater interest is the Sanskrit translation of part of Birjandi’s commentary on the Tadhkira. This translation, by the Sanskrit scholar Nayanasukha, was not of the entire text, but only the eleventh chapter of the second book, in which Nasir al-Din al-Tusi deals with the device called the ‘Tusi couple’ and its application. The impact of the Tadhkira can also be detected in the West, and recent research has provided evidence for contacts between late medieval Islamic and Renaissance astronomy.

For example, the ‘Tusi couple’ was introduced by Copernicus in his De revolutionibus, and another astronomical manuscript, which was in Italy by 1475 CE, includes a treatise   dealing with planetary theory that contains diagrams of a ‘Tusi couple’ and lunar model. Whatever the outcome of the debate concerning the interrelationship between Islamic and Renaissance astronomy, the role and influence of Nasir al-Din al-Tusi in the history of astronomy seems secure.

This is an edited version of an article that appeared in the IIS update in 2010.

This article provides a short informative history of Nasir al-Din...