Over the course of three days, scholars from AKTC, AKU-ISMC and the American University in Cairo shared with the alumni their perspectives on historic and modern Cairo. In addition, there were several opportunities for the alumni to experience the city itself.

In his opening remarks welcoming the alumni and speakers, Mr Shiraz Kabani, Head of Operations, Finance and Development, elaborated on the importance the IIS attaches to its alumni, stressing the need for the alumni body to engage more actively with the IIS.

In his presentation, ‘The development of Cairo into a Muslim City: Key Tensions and Issues’, Professor Bernard O’Kane of the American University in Cairo took the participants through a visual journey of Cairo, which provided an appropriate historic backdrop for the subsequent presentations. The question-and-answer session, led by Sehreen Noor

Ali and Hussein Hirji, brought up a myriad of art-historical questions and led to a lively discussion on the present status of architectural renovations being undertaken in historic Cairo.

Trust for Culture in Cairo and further afield. In his presentation, ‘Historic Cairo between Tradition and Modernity: The Case of Darb al-Ahmar’, Dr Stefano Bianca, former Director of the Aga Khan Historic Cities Programme (HCP), provided an overview of the HCP, with particular emphasis on AKTC’s work in Cairo. Using the Al Azhar Park and Darb al-Ahmar projects as case studies, Dr Bianca highlighted the approach of AKTC to restoration. He noted that AKTC restoration projects do not treat the built environment in isolation, but seek to improve the social and economic fabric of the communities involved, as well as “giving back the city its history.”

Following the question-and-answer session, led by Dr Nargis Virani and Ambreen Saleh, Dr Bianca led the alumni on a guided tour of Al Azhar Park and the Darb al-Ahmar. This allowed the participants not only to view some of the restoration work being undertaken by the AKTC along the Ayyubid walls of Cairo, but also to engage with the Cairene community first-hand in Al Azhar Park. The evening came to a conclusion with a sumptuous meal at the citadel restaurant as the sun descended beyond the Muqattam hills.

On the second day, the morning session was led by Dr Said Sadek of the American University in Cairo. His presentation was entitled ‘Globalisation and Local Cultures: Impact and Challenges in Modern Cairo’ and explored the nature of globalisation as well as its relationship with and influence upon the economic, social and cultural life of Cairo. He also explored the role of the media and of civic society institutions in fostering an evolving sense of Egyptian identity. The question-and-answer session, led by Dr Laila Halani and Hussain Jasani, brought to the surface divergent views on the impact of globalisation upon cities in the Muslim world. 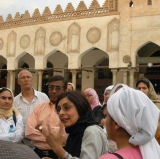 After lunch, a walking tour of historic Cairo and its various architectural treasures was further illuminated by Dr Shainool Jiwa, Head of Community Relations at IIS. Her knowledge of Fatimid history, interspersed with anecdotes from Maqrizi’s account of mediaeval Cairo and of the Fatimid processions that traversed the city, vividly brought to life the past and linked it with the present.

The visit to the Pyramids on the third morning provided an opportunity for the alumni not only to explore some of the heritage of pre-Islamic Egypt, but also illustrated how these majestic monuments are close to being subsumed within the ever-expanding city of Cairo itself.

The afternoon session commenced with a presentation entitled ‘Islamisation and Pluralism: A Case Study of Cairo Past and Present’ by Professor Modjtaba Sadria, of the Aga Khan University’s Institute for the Study of Muslim Civilisations. Through a selection of images of the city, Professor Sadria focused on how Cairo is responding to the challenges of the 21st century, with a focus on how the cosmopolitan city is becoming segregated between the educated elite and the less-educated working classes. The ensuing question-and-answer session, led by Dr Jan-e-Alam

The final session, moderated by Dr Jiwa, provided an opportunity for the participants to reflect on the proceedings of the seminar as well as on areas that could be revitalised to ensure that the alumni body plays an active role in not only its own future development, but also in contributing to the IIS as a whole. In his closing remarks, Shiraz Kabani highlighted the need for greater engagement of alumni in the endeavours of the Alumni Association. He encouraged the alumni who participated in this seminar to serve as ambassadors, encouraging their colleagues to take ownership of the alumni-related initiatives sponsored by the IIS.

In his description of Cairo, Nasir Khusraw lists 31 different varieties of fruits and vegetables that were available in the market when he visited the city. While the three days in Cairo may not have allowed participants to taste all these different fruits, it is hoped that the seminar succeeded in creating a multitude of pathways towards engaging with and understanding the socio-economic and cultural processes in a historic city as it pulsates with modernity.