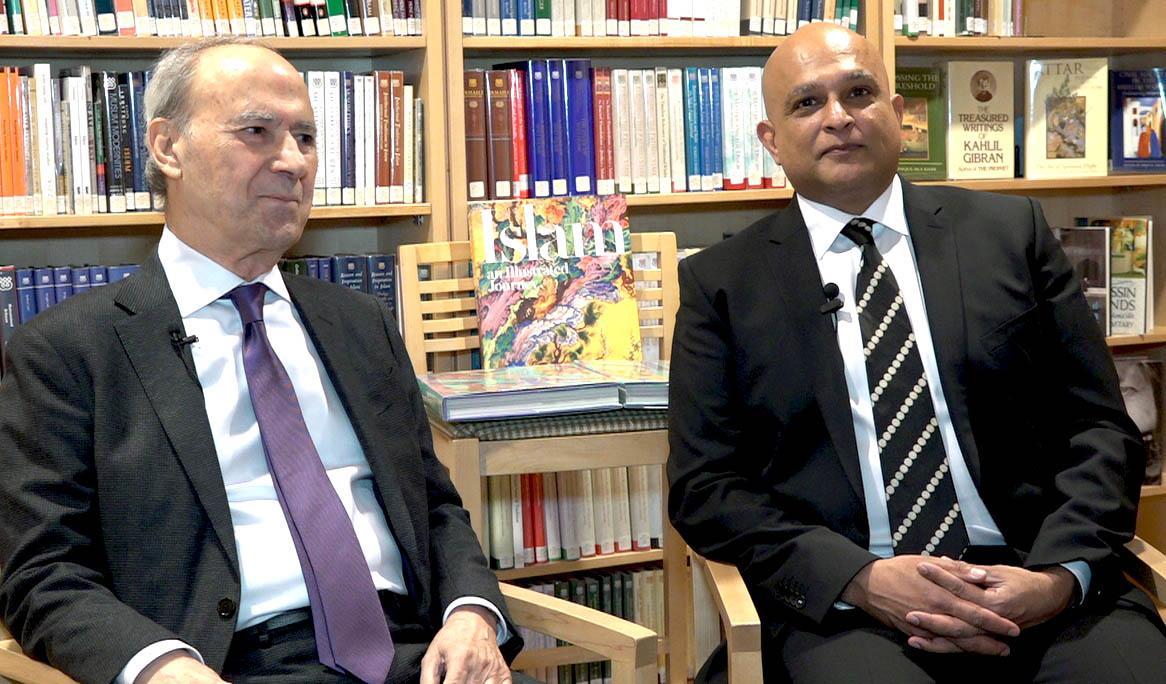 Islam an Illustrated Journey is a Diamond Jubilee publication produced by Azimuth Editions in conjunction with The Institute of Ismaili Studies. The book is a timely reminder of Islam’s rich legacy and pluralistic heritage and takes readers on a visual journey through Islam’s rich 1400 year history.

On 3 November 2018, the first book launch was held at Ismaili Centre, Toronto. Attendees were given first hand insights into the approach taken by the authors Dr Farhad Datary and Professor Zulfikar Hirji to produce an accessible and illustrated account of Islamic civilisation from Late Antiquity up to the modern-day. In an interview, Dr Farhad Daftary explained that in Islam an Illustrated Journey

“Islam is not only treated as a religion, but as one of the great civilisations, so we cover people, religions and cultures.  The books takes the reader through Islam’s evolution through time, in terms of key events, key dynasties, key people and key cultures who contributed to and synthesised Islamic civilisations.”

Covering all the major Islamic dynasties, major doctrinal branches and orientations including Sunni, Shiʿi, Ibadi and Sufi communities of interpretation, as well as the contributions of Islam’s key historical personalities, both men and women,  Islam an Illustrated Journey provides general readers  a fresh perspective on  Islamic history. To guide the reader through this journey, the book contains a number of maps and charts as well as  high high-quality images that depict the diverse landscapes in which Muslims have lived and their architectural and artistic contributions to world civilisation.

In describing the approach the authors took to developing a book about Islam that puts the visual experience on equal footing to the historical context, Professor Zulfikar Hirji said:

“Muslims set out to present the Word of God in a very beautiful way.  Muslims throughout the world have created ways of expressing themselves through the arts and book cultures.  We wanted to bring that experience to readers and show the incredible diversity (within Islam). People use local culture to express Islam and you see all these diverse expressions in the book.”

Comprising nine chapters, the book begins in the world of Late Antiquity, thereby locating Islam within the broader context of the monotheistic traditions of Judaism and Christianity and charting Muslim responses to other religious traditions in its milieu including Arabian paganism and Zoroastrianism. The book emphasises the plurality of responses and interpretations that Muslims have expressed over more than 1400 years, while outlining Islam’s unifying features and its foundations. Hence, the chapter on the Qurʾan also discusses the ways in which Muslims have developed understandings of the Revelation and formulated ways in which to recall, preserve and interpret it from the time of the Prophet up to the present-day.

’s Diamond Jubilee. It is a timely reminder of Islam’s rich legacy and pluralistic heritage in a contemporary context in which Islam and Muslims are often depicted as a homogenous mass or are simplistically presented as being divided by doctrinaire views. The book is not intended to be encyclopedic or comprehensive in its coverage of Islamic history, but rather it points to many of the high points and some of the lesser known stories that make up Islamic civilisation in different geographical areas including the Middle East, South and Central Asia, Africa, as well as Europe. It also sets out to present the many social and cultural encounters, the relationships Muslims brokered with others, through which they found new ways to express their identities and beliefs.

The launch event in Toronto is the first of many international events aimed at showcasing Islam an Illustrated Journey. In 2019, the book will be showcased at the forthcoming Jaipur Literary Festival in India,  and at events in London and Lisbon.