The Qur’an and Adab 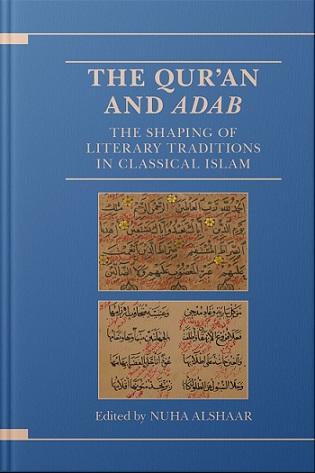 The IIS is pleased to announce the publication of The Qur’an and Adab: The Shaping of Literary Traditions in Classical Islam, edited by Dr Nuha Alshaar. This publication is the sixteenth volume in the Qur’anic Studies Series.

rethinks the relation of scripture to humanistic traditions in classical Islam, in this case adab. Adab has generally been classified as belles-lettres, but this disconnects it from the body of religious literature, its inherent religiosity. The volume demonstrates how the Qur’an in fact shaped the concept of adab and illustrates the religious aesthetic found in different types of adab works – poetry, literary criticism, epistles, oratory, anthologies, ‘mirrors for princes’, folklore and mystical/Sufi literature. Thus, clearly showing the inextricable link between the tradition of adab and the religiosity of the scripture.

The volume discusses the various citation techniques employed by the udabā’ in their borrowing of the language of the Qur’an, as well as its concepts and stories. The chapters illustrate how the use of these techniques reflect a hermeneutical involvement with the Qur’an and how the choice of these techniques was determined not just by the literary conventions of the particular genres and contexts within which the udabā’ were working, but also by their authorial message, and theological and ideological outlooks. Also highlighted here is the way the udabā’ ascribed certain functions to Qur’anic quotations in a specific text in order to convey a particular message to specific audiences. In this respect, the volume illustrates the broader ethical implications of how Qur’anic passages may become co-opted, as they sometimes were by the udabā’, in the service of statecraft, or to influence public morals, or to exhort reform, sway entire ways of thinking and promote certain ethical values.

The volume also examines how the orality and written textuality of the Qur’an lends to its authoritativeness, and provides evidence of how pre-Islamic poetry – which shares identifiable intertextual features with the Qur’an – contributed to this. Collectively, the contributions offer a new, interdisciplinary approach for studying the Qur’an, i.e. through the way the literary traditions of classical Islam interacted with it. Consequently, the analysis of these literary works will enable scholars to better situate the reading and interpretation of the Qur’an in a larger social and cultural context and help them to understand how the Qur’an was interpreted and received during the period studied.