Dr Gurdofarid Miskinzoda is Head of the Shiʿi Studies Unit (SSU) in the Department of Academic Research and Publications (DARP). Gurdofarid is an Alumna of the Institute’s Graduate Programme in Islamic Studies and Humanities (GPISH class of 2002) and the recipient of the Institute’s Doctoral Scholarship Programme. She received her BA in Oriental and African Studies (1998) and her MA in Arabic Studies (2000) from the Institute of Asian and African Countries of Lomonosov Moscow State University. Gurdofarid completed her studies with a PhD in the History of the Near and Middle East and Islam from SOAS, University of London (2007). Her thesis, entitled ‘On the Margins of Sīra: Mughulta’i (689–762/1290–1361) and His Place in the Development of Sīra Literature’, focused on a work of Mughulta’i on the biography of the Prophet Muhammad. It also examined new trends in the understanding of sīra literature and some current issues of studying sīra as a genre of Muslim literary and historical tradition. Dr Miskinzoda’s broader research interests are in the study of Muslim literary and historical tradition, the origins and early development of Islam, and classical Arabic and Persian literature.
Since joining the IIS in 2007, Dr Miskinzoda has served as the Scholarships Coordinator in DARP (2008–2011) and Shiʿi Studies Coordinator (2008–2014), and is currently the Managing Editor of the Shiʿi Heritage Series. She is, additionally, a Lecturer and Course Convener for several STEP and GPISH courses offered at the Institute. She has also worked as a consultant to the Civil Society Director of the AKDN and to the Humanitarian Futures Programme (HFP), King’s College (University of London). 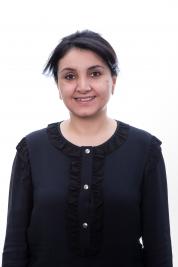