Dr Shiraz Kabani joined The Institute of Ismaili Studies in September 1999. After serving as Executive Officer (1999-2000), Head of Resource Development and Communications (2000-2005), Head of Operations, Finance & Development (2005-2011), and Secretary to the Board of Governors (1999-2013), he now heads the Department of Community Relations.

This department principally serves as a centre for human resource development through episodic programmes and continuing professional development for various constituencies, especially those affiliated with the Ismaili Tariqah

and Religious Education Boards (ITREBs). It also serve as a point of reference and consultation for system-wide programmes of ITREBs that are directly connected to the work of the IIS and for which direct responsibility is not allocated to any other IIS department. In addition, the department supports the enhancement of the IIS-ITREB relationship by serving as the first point of call at the IIS for ITREBs, facilitating input to ITREBs’ programmes and activities, as needed.

In addition to a BSc in Electrical Engineering & Computer Science (1987) and an MBA (1997), Dr Kabani has earned a Doctor of Management in Organisational Leadership (2017). His dissertation, entitled Linking Ethics and Leadership, was based on a hermeneutic phenomenological study to explore the role of ethics in organisational leadership practice in non-profit organisations in the United Kingdom. Dr Kabani’s research interests include leadership in non-profit contexts and ethics in cosmopolitan societies.

Dr Kabani’s professional experience includes eleven years as Executive Officer of the Ismaili Tariqah and Religious Education Board for the USA and as the Managing Director of an IT consulting firm in Houston. Over the past 35 years, he has served as a public speaker and faculty member for human resource development programmes of the IIS and Ismaili community institutions in Europe, North America and South Asia. He has also participated in the conceptualisation of various international projects for the Ismaili community and has served as the Vice President of the Ismaili Council for the United Kingdom (2009-2015). 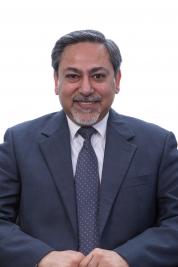