There are several ways in which students are given academic support throughout their two-year study at the IIS. Students are also actively encouraged to participate in conferences which the Department aims to facilitate through the dedicated Student Conference Fund. 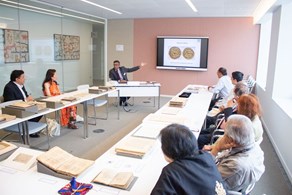 Each new cohort has students with varying levels of English language and academic skills proficiency.

Based on the entry tests we conduct with students and the English language test results at the time of admissions, some students attend pre-sessional courses at SOAS for development of their Academic English Skills. Some pre- and in-sessional Academic Skills classes will also be timetabled for all students at the start of the first term at the IIS. This is to orient students to the academic conventions of the IIS and enhance students’ skills in this area prior to submission of their first assignments. Other sessions may be scheduled by the Academic Skills Support Team at the IIS according to need and upon request (see below for details).

All students are allocated with an IIS Academic Adviser, who is available to provide students with constructive academic and personal development guidance and support across the programme of study that will guide them in their journey to become professional teachers. Academic Advisers also review students’ wider academic progress.

Students who need additional support will be able to meet regularly with the IIS Academic Skills Support Team, who will help to determine the type of support they need.

Students are encouraged to learn from the comments of the lecturers and to discuss their progress with their teachers and Academic Advisers as well as the Academic Skills Support Team and the Programme Leader.

The Aga Khan Library in London holds over 52,000 volumes focusing on Islamic Studies in general and Ismaili, Shi‘i, and Qur’anic Studies in particular.

Additionally, the Library actively collects materials on Muslim civilisations, past and present, and
Muslim diasporas around the world, as well as on a broad range of research topics including religions and philosophy, history, social sciences, art and architecture, literature, and education.

As part of its commitment to become one of Europe’s most relevant Islamic studies libraries, the collection includes books in English and several other European, Asian (Gujarati, Sindhi, Tajik, Urdu) and Middle Eastern (Arabic, Farsi, Ottoman Turkish, Turkish) languages.

The Library has three dedicated subject librarians to provide expert guidance to help students and scholars with their research.

The Library is continuously growing its resources both in print and electronic format. Its digital collection now offers access to over 84,000 titles including journals, databases, encyclopaedias, dictionaries and other reference resources to support research and teaching.

The Aga Khan Library Digital Collections platform has been developed to make many of the titles in its rare and special collections freely available.

These unique collections comprise manuscripts,
artworks, out-of-print publications, photographs, and maps produced in different periods and areas of the Muslim world and are invaluable for the study of Muslim communities and the history, politics, customs, and beliefs that have shaped them.

Beyond written texts, the Library has built up a collection of documentary and feature films covering a wide range of themes and regions of the Muslim world, including Afghanistan, Central Asia, Egypt, Iran, Morocco and Tunisia, as well as Muslim diaspora communities in Europe and North America.

It also has a unique collection of audio recordings of Qawwali music from the Indian subcontinent, Sufi music from Iran and Turkey, and Gnawa music from North Africa and sub-Saharan Africa.

The Library is a member of Jisc Library Hub Discover, a network of academic and research libraries in the United Kingdom and Ireland; and through its partnership with OCLC, has made its holdings available in WorldCat, an international library catalogue.

IIS students have borrowing privileges with the nearby SOAS Library.