The IIS launched one of its new publications, Arabic, Persian and Gujarati Manuscripts: The Hamdani Collection, at the Ismaili Centre in London. The publication is a catalogue of rare and unique manuscripts generously donated by the late Professor Abbas Hamdani to the Library of the IIS.

These manuscripts were compiled by several generations of Indian religious scholars from the Hamdani family, and reflect important doctrinal and cultural changes through the centuries as well as the social history of the family from the Da’udi Bohra community in India and Yemen. 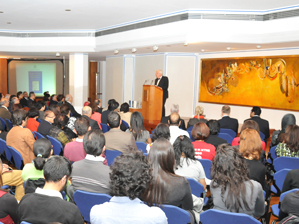 The event began with Opening Remarks by Professor Eric Ormsby, Deputy Head of the Department of Academic Research and Publications at the IIS, who facilitated the receipt of the Hamdani collection and its transfer to the IIS. He introduced Professor Abbas Hamdani, one of the main speakers at the launch event, along with the editor of the catalogue, Professor François de Blois.

Professor François de Blois then made an in-depth presentation on the seven generations of scholars in the Hamdani family who were instrumental in putting the collection together. He also detailed the contents of the collection and discussed several manuscripts in detail, explaining their provenance and symbolism and using images of the originals to illustrate his points. Professor de Blois emphasised the significance of the Hamdani collection for both the preservation of Ismaili heritage and for the wider field of Shi‘i studies. The presentation was followed by questions from the audience, which included scholars in the field and members of the local Ismaili community.

Professors de Blois and Hamdani also signed copies of the catalogue for members of the audience.

Arabic, Persian and Gujarati Manuscripts: The Hamdani Collection follows on from other catalogues of manuscripts in the Institute’s collection:

IIS Summer Programme on Islam held at the University of Cambridge